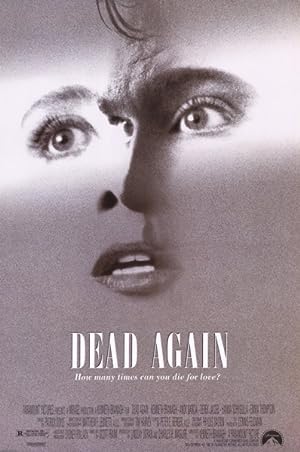 Synopsis: Mike Church is a Los Angeles private detective who specializes in finding missing persons. He takes on the case of a mute woman who is suffering from a total amnesia and doesn't even know her name. She keeps having nightmares involving the murder of a pianist, Margaret, by her husband Roman Strauss in the late 1940s. In an attempt to solve the mystery about her identity and her nightmares, Church accepts the help of an antiquary who arrives to offer his services as a hypnotist. The hypnosis sessions will soon begin to reveal some surprises.
Genre: Crime, Drama, Mystery
Director(s): Kenneth Branagh
Actors: Kenneth Branagh, Andy Garcia, Derek Jacobi, Wayne Knight
Production: Paramount Home Video
Nominated for 1 Golden Globe. Another 1 win & 4 nominations.

Come on in, Mr Baker.

As you can see,|I've become quite a fan of yours.

Is that why you've asked me to|come down to death row, Mr Strauss?

- To tell me what a fan you are?|- I'd like you to print something.

you're so good at that.

that I said I loved my wife.

Of course. Forever. All right.

Aren't you afraid of dying?

To die is different|from what anyone supposes.

- And luckier.|- That a line from your opera?

You really believe|that you're lucky to die?

What I believe, Mr Baker,

is that this is all far from over.

But you still killed her.|Didn't you, Mr Strauss?

These are for you!

You're all right, child.|I'm not going to hurt you.

We found her two nights ago|trying to climb over the gates.

Since then she hasn't|spoken a single word.

She won't eat. And when she does|sleep, she has violent nightmares.

Last night Sister Constance -|she is in the next room -

she heard the woman call|this word out in her sleep.

Father, every night before bed,|she blocks her door with a chair,

and if you had only heard|this woman scream!

- I don't have to hear her scream.|- I will not abandon her, Father.

But, I see no reason

why we can't have someone look for|her family in the meantime.

But we don't have the money|to hire anybody.

The man I'm thinking of|would do it for nothing.

He grew up here. He was a policeman.

He worked in missing persons|for some time.

How's that for a name you can trust?

Pete? It's Mike.|Don't run the ad. I found Carlisle.

I'm on my way to him right now.

If your wife's cousin calls,

Yeah, I took her out.

We went and had some lunch|and we kind of...

We went back to her place and...

No, we're not going out again.

Tell your wife there's nothing|wrong with her cousin,

Mr Carlisle,|I've been retained by a law firm

to find you and tell you that|Myron Spargo died last month.

I had a lot of patients.|Now, beat it.

Lived in San Marino|with his wife, Karen or Sharon.

You've looked at this pack|three times in the last minute.

No. Myron was impotent. Imagine that.

A man lays pipe for a living,|can't get it up at home.

He had some hard-on|when he made out his will.

In 16 years I worked with a|lot of people through a lot of shit.

OK, I slept with a patient or two.

I loved being a doctor.

I used to not charge|half my patients.

A. Scott Frank (born March 10, 1960) is an American screenwriter, film director, and author. He has earned two Academy Award for Best Adapted Screenplay nominations, for Out of Sight (1998) and Logan (2017). more…