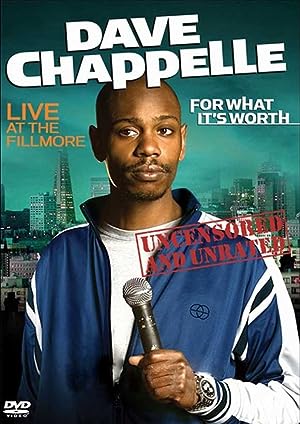 Why'd you pick San Francisco | to shoot your special?

This is one of the best towns | that ever knew comedy.

And this is the most historic venue you got | as far as comedians are concerned.

'Cause Lenny Bruce ripped it down here.

Yeah, all the best came through the Bay.

You don't necessarily | have to be the biggest star.

As long as you come with it | then people coming out.

because it's a savvy audience.

San Francisco, are you ready?

I don't think he can hear you.

Yes, thank you. Thank you all.

Thank you for coming.

I did it big this year.

Thanks for coming out and thanks | for making a n*gger feel comfortable...

in the gayest place on earth.

You guys got Disney World jealous | about this, motherfuckers.

Man. I didn't really think | it was that gay at first.

'Cause when I was coming here...

everyone was like, | man, that place is really gay.

What the f*** is everybody talking about? | It's not so gay.

And then I wandered | into that Castro. God damn.

I went to that Tenderloin.

There's nothing tender about that | motherf***er at all.

That sh*t was rough. The opposite of tender.

I have never seen | crack smoked so casually before.

These n*ggers | was sitting in front of Starbucks...

smoking crack and drinking coffee. | I said, this is off the hook.

I seen one crackhead | trying to break into somebody's car, man...

and it struck a chord with me. | I tried to stop it.

I had a crackhead break my car window | one time. Broke it.

You know what he stole?

Just a goddamn candy bar. I was so mad...

I drove around the neighborhood | for five hours...

looking for a crackhead | with chocolate on his face. I did this.

I finally found him, I grabbed him.

This place is insane.

But you know what I like about San Fran...

and the reason I picked this city | to do my special is because...

of all the major cities in America, | somehow, people get along here better...

than anywhere else I've seen in the country.

And I always admire San Fran for that. | And today, I've realized how you did it.

put all the n*ggers | on the other side of that bridge.

They sure ain't happy on that side.

''Come back in April, | we're having a sale on Birkenstocks.''

in the West Coast. | You guys got subways and sh*t.

I was on a bus that was held hostage...

Wasn't life-threatening. | Don't get that impression.

It was a dude jerking off. | But the sh*t was scary, son.

Right before it happened, | I was on the bus smoking a cigarette.