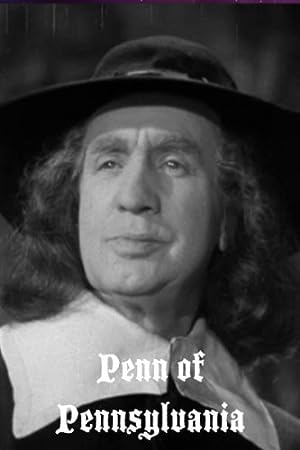 Synopsis: William Penn's heroic deeds, on the European and American continents, are told in this portrait of the founding father of both the Quakers and the Pennsylvania colony. Based on C.E. Vulliamy's biography "William Penn."
Genre: Drama
Director(s): Lance Comfort
Actors: Clifford Evans, Deborah Kerr, Dennis Arundell, Aubrey Mallalieu

Over the caf oh god save the king

where is the key

the king is engaged engaged His Majesty

is detained on affairs of State will you

please find him no no it's no use you

have promised and Snyderman be far away.

but I want to have that well and you've

got to find the nice tomorrow you can

have anything you want but until I know

well come in come in

what is it pardon my intrusion your

impatient you know I'll chicken though

god save the king

bring tea for everyone

to you and your brother

what do you say to this haha

oh I see thank you brother.

Who you and your brother

for heaven's sake and stop that noise

sausage would I know how to deal with

these fellows who do sir william I can't

Have you heard any amusing gossip leave

it no mr. Pheebs but I can hear the

knives that rebel is making I thought

the Admiral was going to put a stop to

it bro he's always telling us what he's

going to do well so will your mother

wasn't they were ducking a Quaker in a

barrel of beer and serves a great

miserable fella tried to spoil all out

of course never said a word just to beg

glum mourn for these impudent Quakers

they belonged to the common mob and yet

the behavior than tolerable insolence to

their betters he even refused to take

off their heads in the presence of the

jail I never heard such insolence and

the nonsense they talk about all men

being brothers and equals who they get

his Majesty does wrong to tolerate such

dishes rebel don't be wit oh they are

sometimes it's an awful nothing well

thank you ah come on in with him.

not that I blew my dear fellow my son's

got too many girls in love with him he's

probably off the vauxhall gardens now I

have heard that he has some very odd

friends nonsense his programs of a very

good soldier His Majesty likes him and

the girls love him irresistible charm

runs in the family yes and it's got a

great future in front of him My dear

fellow that's not the right moves you

want to give the game away and forgive

me so will you laughs I playing this

game or are you jus T and gratitude have

you no gratitude sup yes I'm grateful to.

God we're full of God yes but what about

me pinned I do anything for you haven't

to fit you for a high position in life

you did it out of your own free will and

free will is all I ask don't try to

impress me with your highfalutin

language I may be a plain soldier but I

can hold my own with any man that's why

you're an admin and proud of it sir I'm

part of a tool father like a wish you

were but fear me you have no pride you

had you would not want to throw away the

chance of a career and cutting a fine

figure at the cost to the Quakers all

that is sure end now we'll kill William

let's look at this mess I quite plainly

Terry you a cultured traveled educated

gentleman with great opportunities ahead

of you on the service of your country

and you want to give it all up to

associate with a low common rabble one

of the cover of religion are undermining

all peace and order in the state all I

can say father is at the quaker stand

for righteousness you know what you're

the meaning of it but demi it's not

healthy come brother's how can all men

Discuss this Courageous Mr. Penn script with the community: