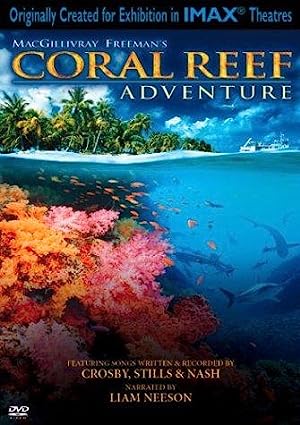 Synopsis: Take a once in a lifetime journey across the South Pacific for a spectacular IMAX adventure. Joy, ecstasy, a spiritual high: these words describe the exhilaration of diving a pristine coral reef, and ocean explorers Howard and Michele Hall bring their love of the ocean into action. With Jean-Michael Cousteau, deep reef scientist Richard Pyle and Fijian diver Rusi Vulakoro, they explore and capture on film the dazzling underwater world of coral reefs, magical places here on Earth. This tropical excursion through the South Pacific will surprise and delight you as you fall in love with the reefs, and your heart will ache at the tragic, irretrievable loss of these fragile worlds.
Genre: Documentary
Director(s): Greg MacGillivray
Actors: Liam Neeson, Howard Hall, Michele Hall, Jean-Michel Cousteau
Production: MacGillivray Freeman Films Pro
2 wins & 1 nomination.

light the dream in corners of minds

this is the world as we wish and could always be

in this great corner of life

others masquerade the stones

but all corals are animals

this under order playgrounds are built by hard corals

which produce lime stone and turn it into homes

stack one on top of the other

how wonderful the largest living structures on earth

are built by tiny animals

doctors use calcium carbonate from coral

to mend our broken bones

when we were sick

chemical components from the reef

may restore our health

no place on earth

rely on fish from reefs

our coral reefs are as necessary as the air we breath

Russy coral a native of Fiji

has always lived close to the sea

my ancestors were careful not to overfish

so our reef was healthy

a blacker death set over the reef

what was killing our reef?

I made up my mind to find the answers

I decide to reach up to

some of my death partners around the world

their underwater photography is world known

when Howard and Micheal got Russy's message

they voyaged the mountains

far from the reefs they loved

I was drawing that flight I kept wondering

what we could do to help Russy

then I realized that

our friend Richard Pile might know what to do

he is a marine biologist

we seeing this kind of problems showing up

Richard showed us how coral reefs to die

and the alarming rate all around the world

ocean warming is the major cause

on film for science

we knew the Max camera with a credible clarity

was the best way to do this

our mission was clear

bring back images of inside

and why Russy's reef was dying

we need to compare Russy's reef

to other reefs all across the south Pacific

starting with the largest of them all

the prospect of diving coral reef

all across the south Pacific

we will make hundreds of dives

and some of these would be deeper and more dangerous

than anything we have done before

it would be a most important expedition

in our thirty years' diving together

parts of the Great Barrier Reef

had been protected from overfishing for two decades

the first goal of this ten-month expedition

is to see how well that protection really worked

when I first dove here 22 years ago

these giant clams were not here

they had been fished up by commercial fishmen

today we have seen 12 giant clams

that means this reef spells its back

let us to the giant potatocut

because they had these patchy potato shape

marking on the sides

throughout most of the Pacific

the really large fish had been wiped out by fishmen