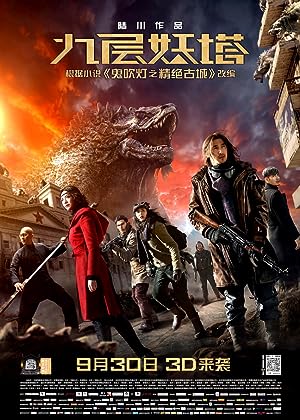 Chronicles of the Ghostly Tribe

Synopsis: The Mongolian Border, 1979: Massive fossils of unknown creatures are discovered in the mountains, and the research team assigned to excavate the remains includes acclaimed Professor Yang (Wang Qingxiang), Hu Bayi (Mark Chao), and Ping (Yao Chen), the professor's beautiful daughter. When a freak explosion, lethal bat attack, and fall to the mountain's floor leaves only a handful of survivors, the small remaining band uncovers a mythic Cyclopean Temple - and an Interdimensional Portal that looses a pack of ravenous Hell-Beasts, leaving only Hu alive. New York City, Present Day: Now living a quiet but tormented life as a librarian, Hu studies demonology manuscripts to find answers for that fateful day. Little does he know that Professor Yang has just been found wandering the mountains thousands of miles from where he supposedly died; a young woman with amnesia was just discovered in a recently-uncovered tomb; and a Northern Chinese mining town has just been ravaged by giant, unknown creat
Genre: Action, Adventure, Drama
Director(s): Chuan Lu
Actors: Mark Chao, Jin Chen, Li Feng, Chen Li

Adapted from the novel

found the bodies of women who are already thousands of years

The skin and flesh still intact

In 1974, discovered fossils of animals unknown in Mount Kun Lun

Kun Lun Mountain enters his own and got a great discovery

Organizations have complete control over the implementation of the research

In the year that I went to Mount Kun Lun

From there, I began to understand

Everyone who comes into the world bringing their destiny

If tired of work, just think of revolution

We fought in the highlands, I sadly fear and anguish, for the sake of the country's success

For the sake of the country's success...

Lets take a break. Life could be floated later

I also have that reaction

But I felt it was long known

Afternoon, an incident in the cave

It is prohibited to divulge it

This time the explosion occurred at the end of the cave

Not marred by humans. Found a new path

Leading into the mountain

And check the cause of the explosion

Do not know why, I guess explosion this time

Well, everything is seen here

As if I see a path toward death

But we were young to be determined

This place is haunted

It seems there is no light down there

There is a stone statue above

What we face is a knowledge which is not yet known.

This discovery will change our history

Lecturer, there is a path here

Everything carefully. Under very deep

Do not run / Assemble!

Pa Hu Yi, see the way the bones were buried there at the mountain

This snow mountain, according to legend, is the gate of the ancient kingdom

He said that there was pent-secret government

Look, do not listen to what he said

Hey... / Sun! Lecturer Yang! There is something here. Hurry here!

The team of researchers, at noon today, at 9.15, stomach Kun Lun Mountains

We urge to continue pursuing the creature, Yang Ling Cia

Ask them to consider the safety / Yes, sir Han

Today, the iron door will be completed. We will post 20 anti-tank shells in the cave

Here it is guarded 24 hours, nonstop

If they receive a call in, will be directly connected here

Chronicles of the Ghostly Tribe