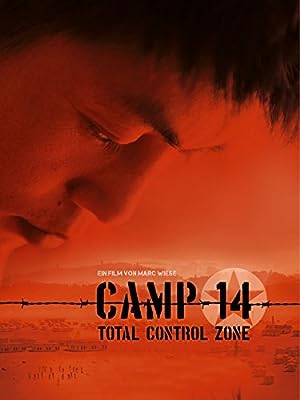 Synopsis: Shin Dong-Huyk was born on November 19, 1983 as a political prisoner in a North Korean re-education camp. He was a child of two prisoners who had been married by order of the wardens. He spent his entire childhood and youth in Camp 14, in fact a death camp. He was forced to labor since he was six years old and suffered from hunger, beatings and torture, always at the mercy of the wardens. He knew nothing about the world outside the barbed-wire fences. At the age of 23, with the help of an older prisoner, he managed to escape. For months he traveled through North Korea and China and finally to South Korea, where he encountered a world completely strange to him.
Genre: Biography, Documentary
Director(s): Marc Wiese
Actors: Shin Dong-Hyuk, Oh Yangnam, Hyuk Kwon, August Diehl
2 nominations.

I still suffer from nightmares.

It's better than the

beginning of my stay here.

But I still have nightmares.

It's not as bad as used to be.

It's become part of my every day life.

I try to ignore the nightmares.

have to do other things.

I'm sitting in the room without

thoughts and without doing anything.

This helps me kill time.

I don't want to think about anything.

Many people have called me recently,

they ask me to tell my story

but I politely refuse.

That's why I say no to such requests.

Of course if I think about

it I could do a lot.

Maybe it's hard for others to comprehend

the outside world was inconceivable to me.

I had never seen the world on

the other side of defence.

I had an idea that there was a country

of North Korea and a bigger world

but I thought that world would

I couldn't conceive of anything else.

I started with forced

labour when I was six.

When I started in school.

I was just a little boy.

The children went into the

mines and push the wagons out.

The adults had loaded with them coal

and we gather all the coal that

had fall out to the ground.

What did the terrain

There was a long mountain range.

Was there anything on top of the hills?

This was the guards' village.

It had an extra fence around it.

Their own village with a fence.

A secured area in a secure camp.

Were the guards scared of revolts?

That was the coal mine.

This is where the prisoners lived.

That's where I lived with my mother.

I lived with my mother in a

small house in the camp.

There was just one room and we slept there.

This was also the kitchen.

There was no furniture. We had no

options but to sleep on the concrete floor.

In the wintertime we put on

as many clothes as possible.

The picture of the camp is almost finished.

Where did the public executions take place?

Here, in a perfectly ordinary field.

The victims were tied to posts.

They faced the river.

Shin, what is your first

memory as a kid in the camp?

event that I remember.

Or maybe yes, when I went to a

public executions with my mother.

I was very young, maybe four

years old. That was the first time.

I remember the poster about the execution.

There was always a poster that announce

the day and the time the executions take place.

came to the executions.

Except for the inmates who had to work

all the prisoners were forced

to appear at these executions.

After the accused had been

a guard or someone higher-up came and said

the prisoners had to work hard

to serve their sentences.

and they hadn't been obedient.

That's why they would been executed.

Immediately after this declaration

they were shot with machine guns.

When the shots were fired I panicked, That is

my first memory of my childhood in the camp.

I have a cold. That's why I don't really have an appetite. Oh-Young-Nam ex

I haven't been sleeping well either.

That's why it's really hard for me.

I knew yesterday that I needed to go to bed early

for the interview today but I didn't sleep well.

ex commander of the guards

Can I make myself

comfortable on this chair?

It doesn't take much to be

In the North Korean system you're

Discuss this Camp 14: Total Control Zone script with the community: