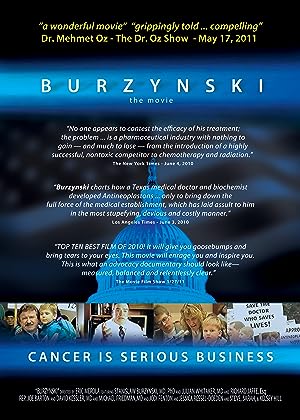 Synopsis: Ph.D biochemist, Dr. Stanislaw Burzynski, won one of the largest legal battles against the Food & Drug Administration in U.S. history. Dr. Burzynski and his patients endured a treacherous 14-year journey in order to obtain FDA-approved clinical trials for a new cancer-fighting drug. His groundbreaking medical and legal battles have brought revolutionary cancer treatment to the public. Upon completion, his treatment will be available the world over - sending a shock wave through the cancer industry.
Genre: Documentary
Director(s): Eric Merola
Actors: Joe Barton, Stanislaw Burzynski, Rick Jaffe, David A. Kessler
Production: Gravitas
1 win.

This is the story of a medical doctor and Ph.D. biochemist

who has discovered gene-targeted cancer medicines

that are known to cure most types of human cancers.

The opening 30 minutes of this film is designed to thoroughly

establish this fact - so the viewer can fully appreciate

My name is Sergeant Ric Schiff. I am an eleven-year

I hold the department's highest medal of honor for bravery

that used to mean a lot more to me than it does now.

you about today is my now 7 year old daughter.

This is an identical twin, her sister is now dead.

Her sister, when she was 4 years old, Crystin developed a highly

malignant brain tumor that had spread throughout her

spine and her brain.

The doctors told us that we had really no options-

take her home and let her die,

or bring her in for massive dosages of chemo and

In either event she was going to die, they were

quite certain of that - and very quickly.

Believing her only chance to be the standard route,

we gave her the chemo and radiation.

It burnt her skull so bad she had second degree burns

and her hair never came back.

To change her diapers we had to wear rubber gloves

because her urine was so toxic and it burned her.

At the end of 6 months, miraculously she survived the standard

treatment, although there was a high expectation that she wouldn't.

She still had cancer. We were told "sorry...

...we've done everything we can, now she's going to die,

probably within a couple of months."

My wife and I choosing not to accept that, started reading

-the first book I picked up, the third chapter,

As you may guess, I have some expertise in fraud,

that I could be voir-dired as an expert in fraud

-and, I conducted my own investigation.

I have no doubt the man is not a fraud.

that his medicine works.

Now, you are in a position to judge for yourselves whether it

-but it's well established by the FDA, that it's non-toxic.

we took my daughter off the Antineoplastons

-she had not died. She had no signs of tumor, she remained

free for eighteen months of cancer.

Within a month, the cancer was wide-spread in her brain.

We put her back on Burzynski's

-by the way at the objections of our doctors

who for some reason felt that it had failed her.

We put her back on [Antineoplastons]-

within nine weeks the tumor was completely gone.

-her brain fell apart from the radiation.

The autopsy showed that she was completely cancer-free.

Out of fifty-two cases of that disease ever,

no one died cancer-free, just Cryssie.

So she didn't die of a terminal illness-

-she died of my inability to care for her properly

and she died from bad advice.

She died because there is a government institution,

and is not looking out for the welfare of the people.

You know, ladies and gentlemen I swore an oath eleven

one time or another to uphold the constitution?

It says "life" right in the beginning.

regarding his innovative approach to cancer.

I wasn't surprised by that-anyone who is innovative in

Discuss this Burzynski script with the community: