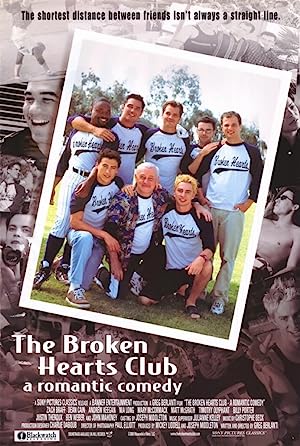 Synopsis: In the palm-shaded oasis of West Hollywood, we meet Dennis, a promising photographer. As he prepares to celebrate his twenty-eighth birthday, he laments, ' I can't decide if my friends are the best or worst thing that ever happened to me.' The gang includes Benji, the punkish innocent with a penchant for gym bodies; Howie, the psychology grad student who thinks too much and lives too little; Cole, the charismatic actor who accidentally keeps stealing everybody's guy; Patrick, the cynical quipster, and Taylor, resident drama queen, who, until recently, prided himself on his long-term relationship. Providing sage advice and steady work is Jack, the beloved patriarch whose restaurant is a haven for them all. When tragedy strikes the group, the friendships are put to the test.
Genre: Comedy, Drama, Romance
Director(s): Greg Berlanti
Actors: Ben Weber, Timothy Olyphant, Matt McGrath, Zach Braff
Production: Sony Pictures Classics
1 win & 1 nomination.

That Cameron Diaz is hot.|Did you check out the new F-150 yet?

I figure after the Laker game, I'll|head to Dublin's, grab some brewskies.

No way, man.|There's no snatch there on Mondays.

- It's total sausage on week nights.|- You guys see that Saxon got traded?

There isn't a straight man who doesn't|refer to anyone but his girlfriend...

But I was so butch|when I said it.

Fine. I don't care that I lost.|I hate games. Where's the check?

You should be proud to have lost.

This whole exercise is an unabashed,|demoralizing case of self-mockery.

This from the man that brought us,|"There's no snatch there on Monday."

If Larry Kramer knew this is how gay men|spent their time, he'd defect.

Larry Kramer can blow me, okay?

Besides, that was 5 minutes|and 32 seconds.

I was saying earlier--

Could I have|a double steroid mocha?

Yes, Benji, yours is a lost cause.

I hate this city.|Everyone's better-looking than me.

It's from the three of us.

And you wrapped it in your pants.

You're the only one of us that never|complains about not having a boyfriend.

as a defense mechanism, a wall.

In which case, this text would serve you|in overcoming your emotional blockage...

and opening yourself up|to the possibilities of a relationship.

Okay, hint taken.|Come on. Just get together.

I really, honestly.|Wait a minute. Look at this.

when I first knew I was gay.

But what I do remember...

I first realized it was okay.

I still need to find a housewarming gift|for my sister and Clubber Lang.

Don't you think you two|should get along?

I could kill you.

You act like he'd never know|we were checking him out.

a cart full of kitchenwares.

What planet are you living on?

Not a person in this store wouldn't|pick you off the homo tree in a second.

- Keep telling yourself that.|- You don't believe me?

Could you come here|for just a second?

I'll have to say big fag.

- Remember my thing with that?|- Right.

that we've been going out...

have been some of the best moments|in my dating career.

What do you think, dear?

I'm not sure. Fold your arms.

I'm the broken piece,|and you wanna know why?

It's because deep down inside...

Are you reading that|off of your hand?

You are. You are totally|reading a script.

Gregory Berlanti (born May 24, 1972) is an American writer and producer of film and television, and film director. He is known for his work on the television series Dawson's Creek, Brothers & Sisters, Everwood, Political Animals and Riverdale, in addition to his contributions to DC Comics on film and television, including The CW's Arrowverse. In 2017, Berlanti set a record in having 10 different live action scripted television series planned to air in the 2017–18 television season on various networks and digital platforms. This record was then self-supplanted for the following season, now at 14. Berlanti also directed the acclaimed 2018 romantic comedy-drama film Love, Simon. more…