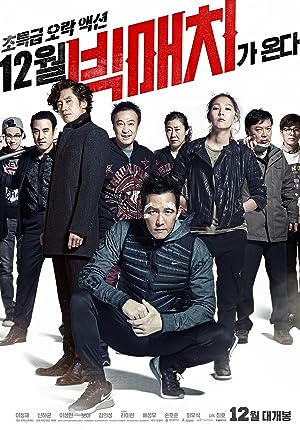 Synopsis: Choi Ik-Ho (Lee Jung-Jae) is a martial arts star with talent for action and humor. But one day, he is framed for murder. Ace (Shin Ha-Kyun) is a game planner, who makes a game for the Korean upper class. He is a villain who makes a city into a big gameboard through technology. Ace and Choi Ik-Ho become adversaries as Choi Ik-Ho jumps into the game to save his brother.
Genre: Action, Comedy, Thriller
Director(s): Ho Choi
Actors: Jung-jae Lee, Ha-kyun Shin, Sung-min Lee, BoA
1 win.

Tonight we will bear witness to the greatness

of a world-class fighter who remains undefeated in his weight class!

He knocks down his opponents with big crushing blows...

and is known by his nickname as the ''Zombie Fighter''

We bring to you tonight: Choi Iko!

It is important to note that before he became a professional fighter,

Choi Iko was a soccer player and he played for one famous football club.

However, he got into a fistfight with a player

from the opposing team in the field during one of their games,

and it made splashy headlines due to the fact

that he almost killed his opponent.

It eventually prompted him to change career paths

and he chose to be a professional fighter.

Today, his name continues to rise above the ranks

due to his tenacity and sheer toughness inside the ring.

With his spectacular KOs and decision wins,

an opportunity to fight for the WFC title was granted.

He's going to be one tough fighter to beat.

And let's also not forget to mention that in his 18 fights,

he has 15 wins caused by 10 knockouts

and 5 were submission wins. Talk about power!

He is truly an outstanding, talented athlete.

On one of Choi Ikos interview after a fight,

he was asked about future opponent and this was his response.

What will be your best weapon in the match with Andrei?

Thanks to my coach! My brother!

If Iko gets the victory in this fight,

he will be taking the title away from the defending champion, Andrei.

He will become the king, the champion!

At this point, we will be bringing in a report

from the camp of the opponent;

What will be his response to the cancellation

of the title match caused by his illegal drugs use?

As a matter of fact, Andrei was stripped off the title

and was furious about that decision,

and for an athlete that is a worse than being handed a defeat.

He looks extremely infuriated and

was aggressive towards the reporters.

Look at what he did to the wall!

The match with Andrei wouldve been dangerous;

he couldve gotten himself killed.

- Should we go and check on him?

Ill just need to talk some sense into him,

maybe spar a bit and give him a wake up call.

You can do it! Fighting! I have your back.

Hey Iko! Come on, when are you going to stop feeling sorry for yourself?

Come on out here, are you still a baby?

Are you crazy? Huh?

I thought you were moping about the cancelled match with Andrei,

- Let's just eat, theres not much to say about that.

Hey listen! If youre going to be a champion,

How the hell can you eat at a time like this?

What can a man do here to have just one decent meal?

Sit down and eat?

Im going to make you realize

Try to escape from this choke!

- Hey, what the hell are you doing?

We are in a meet and greet session with professional fighter Choi Iko.

Today, Mr. Choi presents an opportunity for fans to meet and practice with him.

In which everyone can show their fighting abilities,

and be instructed by non-other than Choi Iko himself.

All of these really make fans go crazy.

This really is an extraordinary action of a true champion.

Our parents always told us to take care of each other

and feel what each other feels.

Kim Sang-woo (born July 3, 1993), better known professionally as Roy Kim, is a South Korean singer, songwriter and radio presenter. He began his singing career after winning Mnet's talent competition series Superstar K4. Kim, who is an undergraduate student at Georgetown University, initially planned to major in business administration; he later announced plans to switch his major to sociology.Kim officially debuted with his first studio album, Love Love Love (2013). The album spawned two hit singles, one of which ("Bom Bom Bom") became the fourth most successful song of that year in South Korea. Following the album's success, Kim won trophies for best newcomer at the 15th Mnet Asian Music Awards and the 2014 Golden Disk Awards.Since his debut, Kim has released three studio albums, scoring two number-one singles on the Gaon Music Chart. In addition to his own music career, the artist has also participated in soundtracks for television series including Reply 1994, Pinocchio, Twenty Again and Another Oh Hae-young. As of August 2018, Kim has sold over 12 million digital downloads in his native country (see Roy Kim discography). more…

Discuss this Big Match script with the community: