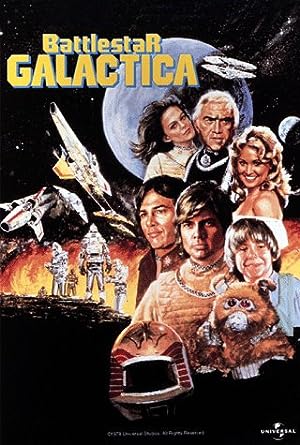 Synopsis: The leaders of the Twelve Colonies of Mankind are making plans to sign a peace treaty with their mortal enemies, the Cylon Empire. On the eve of the ceremony, the Cylons betray the pact and destroy most of the Colonies and their entire fleet. Under the command of Commander Adama, the battlestar Galactica leads the remaining Colonial ships into space and seeks out a lost thirteenth colony, which turns out to be Earth. Along the way, the Colonials encounter various races (both friendly and hostile), the legendary human warrior Commander Cain, and the planet Kobol, the motherworld of all the Colonies. All the while, the Cylons - under the command of human traitor Count Baltar - closely pursue this fugitive fleet across the universe.
Genre: Action, Adventure, Sci-Fi
Actors: Richard Hatch, Dirk Benedict, Lorne Greene, Herbert Jefferson Jr.
Nominated for 2 Golden Globes. Another 3 wins & 6 nominations.

that life here|began out there,

far across the universe,

with tribes of humans...

who may have been|the forefathers of the Egyptians...

that they may have been the great|architects of the great pyramids...

or the lost civilizations|of Lemuria...

Some believe that there may yet|be brothers of man...

who even now fight|to survive,

I realize you are all anxious|to get back to your ships...

before our rendezvous|with the Cylons,

but I think it appropriate|to toast...

the most significant event|in the history of mankind.

not merely|as the quorum of 12,

but as my friends--

As we approach|the seventh millennium of time,

the human race at last|will find peace, thanks to you.

Zac, now just calm down.|Why are you so nervous?

- He still thinks of me as his little brother.|- Well, you're acting like one.

Look, I'm a warrior. I earned that.|I wanna prove that to him.

I know, Zac, but this|may not be the best time.

Well, it's a peace envoy.|What possible trouble could there be?

- Well, that's not the point.|- Starbuck, you promised.

I mean, with everybody|not wanting to go on this patrol--

everybody wants to celebrate|the armistice, uh--

I wonder who I'm gonna|be able to find.

I've studied the coordinates|from here to the Cylon capital.

My ship's ready to go.

Yeah, that's a real|stroke of luck.

Well, I guess you're just gonna have|to pull Starbuck's patrol with me.

Listen, uh, maybe|I ought to go along.

- You forget how different it is out here.|- [ Apollo ] This is nothing.

When the war is officially over, we may be|able to get back to deep star exploration.

That's the challenge, Zac. Let's roll|over and take a look at the Lianus vector.

this armistice conference|would not have been possible...

without your tireless work.

You have secured for yourself|a place in the history books.

That the Cylons chose me as|their liaison to the quorum of the 12...

was an act of providence,|not skill.

I see the party is not a huge success|with all my children.

What awaits us out there|is what troubles me.

Oh, surely you don't cling|to your suspicions about the Cylons.

but they hate us with every|fiber of their existence.

to feel, to question,|to resist oppression.

Glen Albert Larson (January 3, 1937 – November 14, 2014) was an American musician, television producer and writer. His best known work in television was as the creator of the television series Alias Smith and Jones, Battlestar Galactica, Buck Rogers in the 25th Century, Quincy, M.E., The Hardy Boys/Nancy Drew Mysteries, B. J. and the Bear, The Fall Guy, Magnum, P.I. and Knight Rider. In addition to his television work, Larson also was a member of the folk revival/satire group The Four Preps. more…