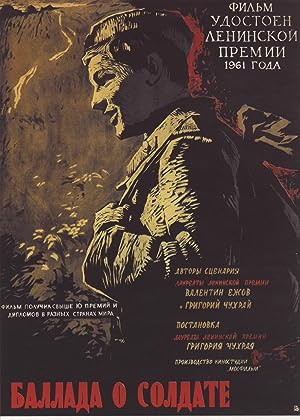 Ballad of a Soldier

Synopsis: During World War II, 19 year old soldier Alyosha gets a medal as a reward for a heroic act at the front. Instead of this medal he asks for a few days leave to visit his mother and repair the roof of their home. On the train eastwards he meets Shura who is on her way to her aunt. In those few days traveling together they fall in love.
Genre: Drama, Romance, War
Director(s): Grigoriy Chukhray
Actors: Vladimir Ivashov, Zhanna Prokhorenko, Antonina Maksimova, Nikolay Kryuchkov
Production: Criterion Collection
Nominated for 1 Oscar. Another 6 wins & 3 nominations.