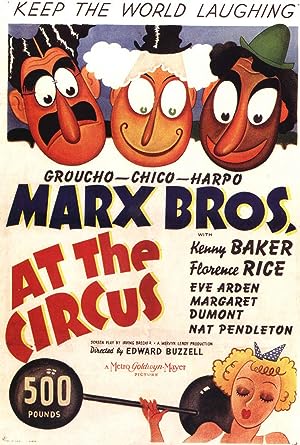 Synopsis: Jeff Wilson, the owner of a small circus, owes his partner Carter $10000. Before Jeff can pay, Carter lets his accomplices steal the money, so he can take over the circus. Antonio Pirelli and Punchy, who work at the circus, together with lawyer Loophole try to find the thief and get the money back.
Genre: Comedy, Musical
Director(s): Edward Buzzell
Actors: Groucho Marx, Chico Marx, Harpo Marx, Kenny Baker
Production: MGM Home Entertainment

You keep on eating between meals,|you'll ruin your figure.

And if you keep on fooling around|that gorilla...

Jeff, even though Gibraltar likes you...

I wish you wouldn't|take so many chances with him.

Julie, if that would make you|worry about me...

I'd move right into the cage.

It might seem a little cramped|after that house of yours in Newport.

Newport? Where have I heard that before?

I remember.|That's something in my dim, dark past.

but the smell of sawdust|can get awfully monotonous after a while.

Young lady, that's no way|to talk to your boss.

Step up and take a bow

Don't be modest, don't be shy

Show that thoroughbred look in your eye

Step up with grace and pride

Each heart begins to beat in rhyme

But whoever heard|of anyone singing with a horse act?

The audience likes it.

At this time,|presenting that muscular marvel...

the strongest man in the world:

And now the mighty Goliath...

I got no time. I got to find Mr. Carter.

Hello, Sam, and that's all.

But it isn't due until Saturday night.

That's right,|but unless you have it for me...

I'm afraid I'll have to take the circus over|to raise the money. I'm in an awful spot.

That won't be necessary, John.|I'll have your money for you tonight.

Shut up. I'm talking. Did you say tonight?

Yes. With today's receipts,|I'll have enough to pay you off.

I'll give you your money|on the circus train tonight.

I just got word from my lawyer.|He got me a divorce.

And one month every year|I win the custody of my wife's parents.

Take it up with Mr. Wilson.

What's the matter, boss?|Carter making trouble for you?

He's doing the best he can.|But don't you worry about it, Tony.

You know what I say?

When you got business trouble,|best thing to do is get a lawyer.

Then you got more trouble,|but at least you have a lawyer.

I ain't got nothing,|but you can always have half.

This will bring him pretty quick.

You got something a little cheaper?

For example,|suppose somebody gets married.

No. I mean, suppose your sister|had a baby. You'd send her a telegram.