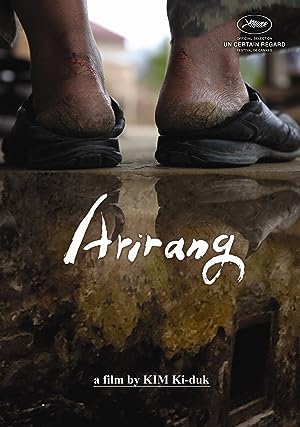 And then the actors begin to recite their lines

express different emotions and so on.

There are differences between

the roles of angels who say good things

and roles to bad they say bad things

is advantageous for the actors reciting bad parts?

prefer to do the good or bad?

Kim Ki-duk What are you doing?

Because now you can not make a movie?

What is wrong with you?

Now I can not make films. So I take myself.

Going back to myself,

I confess my life,

as a director and as a human being.

Around a movie about myself

It could be a documentary,

a drama or fantasy genre

I interpret the characters that

take the camera and film

There is nothing scheduled

but I need to shoot something to be happy

So I film myself

There is a movie I want to run.

an American soldier who fought in the Korean War.

after 30 years, before dying,

returns to search for the body ..

of the person killed.

Being old he returns to Korea

and goes to a village.

Buys Himself a shovel and salt on a mountain.

begins to dig around, but can not find the corpse.

and about to give up and leave,

when he meets a woman.

This woman helps him search for the body.

He returns to His self from

the past, a soldier in the Korean War

He takes up to rilfe and starts wearing a uniform

Returning to His Old Self.

Only then can he find the body.

Then he takes the body.

Then he lets it go.

While still ill, goes to a shaman

and meets the spirits of the dead woman.

This is the synopsis

Trying to make this film I also spoke with Willem Dafoe

But the circumstances are not favorable

I would do, but for different reasons, I can not.

Crying Would not turn into love

As if to console me with tears.

You can also go

But you can not go more

in the middle of the countryside?

Living in a shack so cold

That you have to put a tent in it?

Why do you insist on living

You're not shooting the film?

So you will reduce drinking every day?

That's why they say you are totally depressed.

People are so sorry that you are

embittered by betrayals, lies somewhere in the mountains

Why do you do this?

Do you think this is right?

In a place where water freezes in cold weather.

A wretched place with not even a bathroom in it

This you call life? Where are the plates then?

What are you? A dog? Eat in a dog bowl

It seems that for years do not wash your clothes

And what happens to the atlas?

And because of the incident

in the prison during the filming of "Dream"?

And that actress in the scene of the hanging?

Have you run away to another cell to cry, and so?

It was an accident! Admit that you're scared

You did not expect really, huh?

Seeing her hanging there you scared me to death

But you climbed a ladder and you saved her.

So what's the problem?

Do you think if I had not acted quickly

you could kill someone during the filming of a movie?

Think of this scares you to death?

And then you decided to stop making movies?

Due to this shock?

Tell me, you bastard!

Are you connecting to the internet?

Discuss this Arirang script with the community: