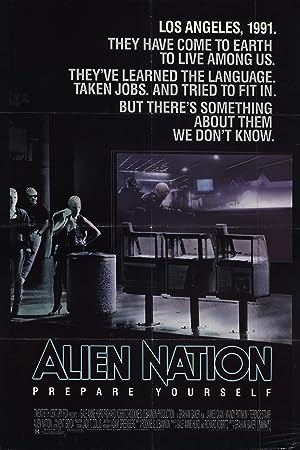 Synopsis: A few years from now, Earth will have the first contact with an alien civilisation. These aliens, known as Newcomers, slowly begin to be integrated into human society after years of quarantine but are victims of a new type of discrimination. When the first Newcomer police officer, Sam Francisco is assigned his new partner, he is given Matthew Sykes , a mildly racist veteran, the animosity between them soon gives way to respect as they investigate the Newcomer underworld, and especially Newcomer leader William Harcourt.
Genre: Action, Sci-Fi
Director(s): Graham Baker
Actors: James Caan, Mandy Patinkin, Terence Stamp, Kevyn Major Howard
Production: Twentieth Century Fox Home Entertainment
1 win & 4 nominations.

have escorted them down...

I don't think it is.

- This is not a hoax. That is real out there.

(newsreader) That was the scene in

The historic frst view of the Newcomer ship

upon its dramatic arrival.

These "Newcomers", we soon learned,

were a genetically-engineered race

in almost any environmental condition.

In effect, their ship was a slave ship,

washed ashore on Earth, with no way

to get back to where they came from.

Now that civil liberties attorneys have had

the Newcomers released from quarantine,

what are the reactions in

Why do we have to take them?

Why can't they go to Russia?

I'll drink to that!

I'm in college now. I'm going to be

going to school with nine- or ten-year-olds.

There goes the grade curve.

There goes my job future.

I have to compete with... If a ten-year-old is

twice as smart as me... I'll be workin'here.

By far the strongest words of acceptance

We've come to a turning point,

a moment for hard decisions.

And if not now, when?

Hey, Henry, how you doin' tonight?

You get your green card, buddy?

Slagtown. I hate this place. Look at that geek.

I hate it. Look at this crap.

- I wonder if their plumbing's the same.

What? Oh, man, get outta here.

Take a hike, will ya? Jesus Christ!

Why has it gotta be sour milk they get wasted

on? Why not Jack Daniel's or Thunderbird?

What's wrong with that?

Look at this. Fred Astaire and Ginger Slag.

What the hell's that?

Look at this. They call this a game.

They make up shit. I don't know what that is.

Beatin' each other to death.

So are you gonna go

or are you not gonna go?

Put on your wash-and-wear suit,

have your landlady tie your shoes for you,

then you show up at the church. It's simple.

- Me and Carol are going.

well, since she was conceived.

Remember? Up in that cabin at Big Bear?

You and Edie pounded the walls so hard,

me and Carol picked plaster

out of our hair for a week.

Obviously, I want to go to

You're just bummed out because your ex-wife

and her new husband are payin' for it.

If Kristin had to get married where I could

afford it, it would be beans in a bowling alley.

- Now does that look suspicious or what?

- Whatever gave you that idea?

Porter's Minimarket on Virginia and Court.

Pay attention. Tell me what those

ugly bastards are doin' in there.

That's not very good at all.

- Have you got your vest?

- Of course. In the trunk of the car.

and get a better angle on that door.

- Yeah, you watch your ass.

Tug! Get outta there!

Rockne S. O'Bannon is an American television writer, screenwriter and producer. O'Bannon has created five original television series (Farscape, seaQuest, Defiance, Cult, and Alien Nation). O'Bannon made his writing debut selling spec material to NBC's Amazing Stories (1985) and CBS's The Twilight Zone (1985), but first garnered critical attention for his film Alien Nation (1988) and its subsequent spinoff television show. His next notable achievement was his original series seaQuest DSV (1993) which ran for three seasons. O'Bannon's most critically acclaimed success was the space epic Farscape on Syfy (1999–2003) which ran for four seasons and spun off into a mini-series, a comic book series, and a rumored film. Since Farscape, he's created the TV show Defiance (2013) and CW's Cult (2013), the miniseries The Triangle (2005), along with helping to write the Warehouse 13 (2009) pilot. He's also written and produced for Constantine, Revolution and V among others. O'Bannon prides himself on creating "shows that truly aren't like anything else" and pushing the boundaries of the science fiction genre. He's won multiple Saturn Awards (including best series for Farscape) and been nominated for other awards such as a Hugo Award and a WGA Award. more…

Discuss this Alien Nation script with the community: