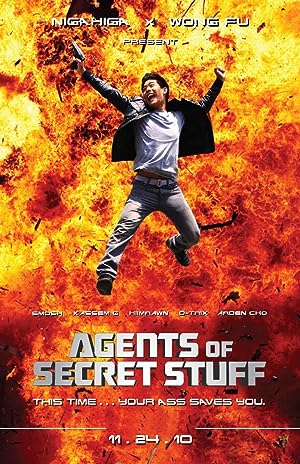 Synopsis: Aden is a teenager who has been training all his life to become an official agent of the A.S.S. (Agents of Secret Stuff). To do that he must impress Tracy to give him his A.S.S. Honorary Operative License Entitlement (H.O.L.E.) on his mission. He is assigned a mission to go undercover and protect Taylor, a high school girl who is a target of an assassin group known as the S.I.N.S. (Society of Not-So-Good Stuff).
Genre: Action, Comedy, Short
Director(s): Wesley Chan, Ted Fu, Philip Wang
Actors: Ryan Higa, Arden Cho, Dominic Sandoval, Rawn Erickson

I know what you are thinking.

but I assure you,

I have everything under control.

Ugh, such a dirty shoe.

I am not your average teenager.

I never get to grow up with a family with bikes and candy.

My family was an international network of killers.

I bike with a Falcon Recon 23X,

and the closest thing I ever got to candy was...

But that is not the point!

as long as remember, I've been trained to become an A.S.S.,

an Agent of Secret Stuff.

For 17 years I've been trained along side with one of the coolest, boldest, most heartless killer of all the A.S.S.es,

3 months ago, on the final day of my training,

Tracy brought me in front of a panel,

I am talking top quality A.S.S.

We've been on missions around the world,

And now, it is time to become an official Agent of Secret Stuff.

But, before I give you your Honorary Operative License Entitlement,

you have one more assignment you must complete.

- But... Sir! With all due respect, I devoted my life to training.

We do not complain when things get too hard.

We push on through, and we take it.

- Aiden, we need you for a special assignment that only you can execute!

The Society Involving Not-so-good Stuff, a.k.a. the S.I.N.S.,

they have been our mortal enemies for decades.

And now, they have found a new target,

We need an agent on the inside.

We believe that the S.I.N.S. have already infiltrated the school with assassins of their own!

Your mission is to pose as a high school student and protect Taylor from impending threats!

- That will be revealed in a later time,

We have already made preparations for your enrollment,

a spot has been made available in all of Taylor's classes.

She must not know that she is in danger!

This is a new world for you!

High school students are the most dangerous and misunderstood citizens that you will ever come across!

You must operate cautiously.

Guys, I need your attention just for one second.

Shut up. We have a new student.

His name is um... Jose McDonald.

Why don't you say Hi, Jose.

Right on man, you're gonna fit in perfectly.

Why don't you take a seat in front of Bieber there.

You guys open your book to Chapter 14.

- Hey, I'm Taylor, Can I help you with something?

So it's gonna be like our code word for "danger"?

- Taylor, zip it up and shut your face hole.

These kids are trying to learn.

- Hey Taylor, can I borrow your pencil sharpener?

by inserting the yellow thing into the green thing, the dull thing will turn into a sharp thing.

He will then proceed to jump behind his target while she is pre-occupied,

and apply a fatal impend weapon into her jugular artery!

Wesley Chan was an early product innovator at Google Inc., best known for founding and launching Google Analytics and Google Voice. He is currently a Managing Director at Felicis Ventures and invests in early-stage technology and software startups. more…