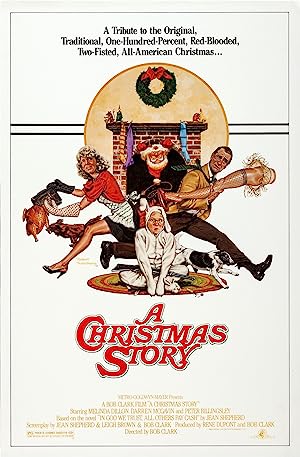 Synopsis: Christmas is approaching and 9 year-old Ralphie wants only one thing: a Red Ryder Range 200 Shot BB gun. When he mentions it at the dinner table, his mother's immediate reaction is that he'll put his eye out. He then decides on a perfect theme for his teacher but her reaction is like his. He fantasizes about what it would be like to be Red Ryder and catch the bad guys. When the big day arrives he gets lots of present under the tree including a lovely gift from his aunt that his mother just adores. But what about the BB gun?
Genre: Comedy, Family
Director(s): Bob Clark
Actors: Melinda Dillon, Darren McGavin, Scott Schwartz, Jean Shepherd
Production: MGM
3 wins & 11 nominations.

And good old Cleveland Street. How could I ever forget it?

And there I am, with that dumb round face and...

But no matter. Christmas was on its way.

around which the entire kid year revolved.

Downtown Hohman was prepared for its yearly bacchanalia of...

peace on earth and good will to men.

of the pre-Christmas season.

before a golden tinkling display...

Wow, there it is.

The holy grail of Christmas gifts.

And there he is.

In his hand was the knurled stock of as coolly deadly-looking...

a piece of weaponry as ever I had laid eyes on.

For weeks, I had been scheming to get my mitts on one of these...

My fevered brain seethed with the effort of trying to come up with...

into my parents' subconscious.

Down here in two minutes!

And I mean two minutes!

Come on, Ralphie. I got here first!

My mother, grabbing for her copy of Look magazine...

would find herself cleverly trapped into reading a Red Ryder sales pitch.

They traded Bullfrog. I don't believe it.

the only player they've got, for Shottenhoffer.

Got a whole goddamned team of utility infielders.

Ralphie, on the double!

Did you hear about this guy who swallowed a yo-yo?

Some clodhopper down in Griffith, Indiana.

They write the silliest things in the newspapers.

What do you mean, silly? I mean that's real news.

What is the name of the Lone Ranger's nephew's horse?

Victor. His name is Victor.

How the hell did you know that?

That's another one of your silly puzzles?

Yeah, it's another one of our silly puzzles.

What kind is it this time?

Meanwhile, I struggled for exactly the right BB gun hint.

It had to be firm, but subtle.

They looked at me as if I had lobsters crawling out of my ears.

I could tell that I was in imminent danger of over-playing my hand.

I'll bet you'll never guess what I got you for Christmas.

My old man was one of the most feared furnace-fighters...

Hurry up, you're going to be late for school.

Round one was over.

I could feel the Christmas noose beginning to tighten.

Maybe what happened next was inevitable.

Horrified, I heard myself blurt it out.

No. Shoot your eye out.

Oh, no! It was the classic mother-BB gun block.

"You'll shoot your eye out."

That deadly phrase uttered many times before by hundreds...

of mothers was not surmountable...

by any means known to kid-dom.

But such was my mania, my desire for a Red Ryder carbine...

that I immediately began to rebuild the dike.

Jean Parker Shepherd, Jr. (July 26, 1921 – October 16, 1999) was an American storyteller, radio and TV personality, writer and actor. He was often referred to by the nickname Shep. With a career that spanned decades, Shepherd is known to modern audiences for the film A Christmas Story (1983), which he narrated and co-scripted, based on his own semi-autobiographical stories. more…