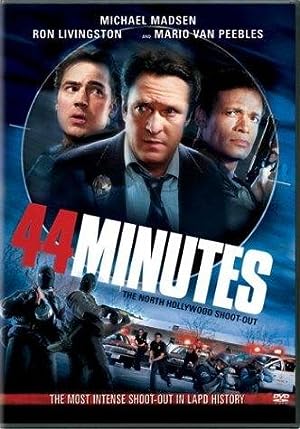 Synopsis: On 28 February 1997, two men heavily armed with AK-47 try to heist the Bank of America of North Hollywood, but their plan fails and they are kept under siege by the LAPD. Along forty-four minutes, Los Angeles witnesses live on television one of the greatest shoot-out of the American history.
Genre: Action, Crime, Drama
Director(s): Yves Simoneau
Actors: Michael Madsen, Ron Livingston, Ray Baker, Douglas Spain
Production: Fox Television Studios
Nominated for 2 Primetime Emmys. Another 2 nominations.

go through their entire career|without ever firing their gun.

We were armed with pistols.

These guys were slinging|automatic machine guns.

is a weapon|that was designed for war.

to penetrate armour|and kill their target.

and you've done something that|no one in America has ever done before.

Danger's all around us--|in the streets...

maybe even the guy next door.

Looking for a high|of 7 2 degrees by midday.

Lord, help me to remember|there are many paths and one truth.

Help me to do the right thing|out there.

You know any of'em?

Yeah, Davis.|He was a good man.

We went through|the academy together.

- So, you gonna mail those taxes today?|- Yeah.

My father was|my hero and a legend in the LAPD.

He died in his patrol car|of a heart attack.

All I ever wanted|was to be just like him.

And my dad was proud.|He loved it when I made SWAT.

And we respond|to any situation.

wouldn't really have the firepower|or the training to handle.

Drop your weapon!|I need a trailer!

Where the hell were you?

I got multiple suspects here.

Donnie, what the hell|happened in there?

Yeah, I was there.

Hey, you gotta|take it down a notch, partner.

Don't worry about me, all right?|Wrap this up and get in the car.

Good morning, half past the hour...

and it looks like|another beautiful

day in the City|of Angels.

For the latest on your|commute, let's go high

in the sky with our own|Captain Chuck Scott.

Couple of trouble spots we'll be|telling you about in our next update.

Right now, clear blue skies,|wind out of the northeast by 1 5.

And we will have a complete|traffic break for you coming up in 1 0.

We're the best of the best,|and we get all the high-profile cases.

Joe Friday and all that.

The only difference is that, uh...

those guys don't have to juggle|7 5 cases all at once.

Me, I've got to prioritize.

We had a name for|them. We called

They kill a guard.

That kind of firepower|in a bank job is unheard of.

These guys were an anomaly.

I made a promise|to that widow that I wouldn't quit...