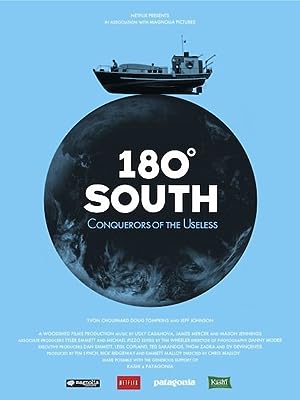 Synopsis: Conquerors of the Useless follows Jeff Johnson as he retraces the epic 1968 journey of his heroes Yvon Chouinard and Doug Tompkins to Patagonia. Along the way he gets shipwrecked off Easter Island, surfs the longest wave of his life - and prepares himself for a rare ascent of Cerro Corcovado. Jeff's life turns when he meets up in a rainy hut with Chouinard and Tompkins who, once driven purely by a love of climbing and surfing, now value above all the experience of raw nature - and have come to Patagonia to spend their fortunes to protect it.
Genre: Documentary, Drama, Sport
Director(s): Chris Malloy
Actors: Yvon Chouinard, Doug Tompkins, Keith Malloy, Alicia Salome Acuna Ika
Production: Magnolia Pictures

It all started in my old forge

It was a crude little shop

but we were making

Your know, we were making stuff

for ourselves, number one

and we happened to be on kind of

the cutting edge of climbing at the time.

None of us wanted to be businessman,

but we had to do something

just to support our climbing habits,

poor climbers and surfers and stuff,

and every time the surf come up,

we'd all abandon the shop and go surfing.

We picked up a 16 mm Bolex camera

to record the trip.

We loaded the car up with surfboards and climbing gear,

I think from the time that we decided to go,

We bought this old van

and took off from Ventura.

the Pan-American Highway was pretty wild.

It was dirt road from Mexico city all the way south.

It was like being in Montana, Wyoming a 100 years ago.

Here we're in an area that is the size

of the all American West,

For those of us that grew up,

going out into the wilds of the world,

where nature was basically untouched,

we got into our souls a sense of beauty.

That trip had a big influence

on both Doug and I,

it kind of set the course for what

we were going to do later in life.

For me, it was the best trip of my life.

10 years ago, I found that old footage of

I'd ever want to do in my life.

From that point on, I promised myself that someday,

I'd find a way to do a trip like theirs.

Years went by before I finally got my chance.

I heard about a boat docked down in Mexico

that was heading for Patagonia.

They needed a crew,

and I needed a ride South.

My name is Jeff Johnson,

look in any phone book and you'll find ten of me.

I grew up in Danville, California.

You've probably never heard of it,

but it's a long way from

the ocean and the mountains.

on the path that I'm still on:

the first one was when my parents took me

on a camping trip to Yosemite Valley.

I remember looking through a telescope

up at this huge granite wall,

and guys climbing thousands of feet up.

I couldn't believe my eyes.

walking on the moon.

That same year, I saw surfing for the first time,

on TV:
"Wide World of Sports".

I saw these guys riding massive walls of water.

There were people out there putting themselves in places

they weren't supposed to be,

and I knew right then,

that I want to be there too.

Most of my life, I figured out ways to pick-up and leave

as the seasons change.

I've been a dishwasher, a lifeguard, a flight attendant,

whatever it took to pay for the next trip.

In the last couple years though,

I found a real job,

I've spent a lot less time on the road,

but I never forgot about my dream

of seeing Patagonia with my own eyes.

Sure, I can take my 2 weeks' vacation time

and just fly down to Patagonia,

but I'll never get a chance like this one again.

If I don't get on that boat,

I know exactly what I'm going home to.

If I do, my future is unwritten.

that's where everything becomes clear,

where the world makes the most sense.

When I put myself out there,

I always return with something new.

Discuss this 180° South script with the community: