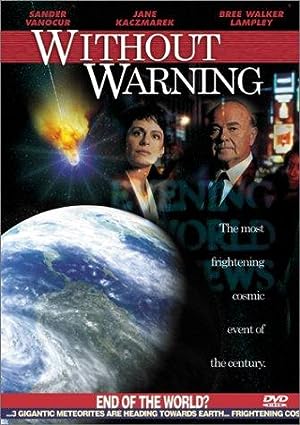 Synopsis: A television program is interupted by a news network announcing that three meteors have hit the United States, France and China. At first it seems natural but after interviews by scientists and eyewitness seems to suggest that it is not. Three more meteors are coming and the various Earth governments combine forces to stop them.
Genre: Sci-Fi
Director(s): Robert Iscove
Actors: Sander Vanocur, Jane Kaczmarek, Bree Walker, Dwier Brown
Production: Wolper Organization
1 nomination.

I came down in a cable car, and err

Jean sat here, he wanted to sit down,

For the last one of the day.

And he never got back.

French rescue trams are combing the

A bitter twist to an already

The French have an expression.

"The more they stay the same"

But tonight as the lucky ones celebrate happy to be alive...

.One senses these people will never be the same again

Little is known tonight about the third

But as correspondent Denise Wong

the communist government has put

the country on a state of alert

the morning here in Beijing.

The Chinese news agency has reported, that the

Along China's border with Mongolia.

While little more has come

from the government here.

By the French satellite agency

From 12 miles above the Earth.

The crater is almost a mile

and a half across

To the Wyoming impact site.

What do you know about casualties?

Is in a remote area.

Of the Gobi Desert, with

no rail lines, on two highways.

As a result, it may be days, before the full

damage from this crash site can be assessed.

We'll be back to Denise as soon

as there's more Thank you!!

We switch now to the Johnson Space Center

where Matt Jensen, is standing by

who track these enormous Asteroids.

Sometimes refer to them, as Killer Rocks!!