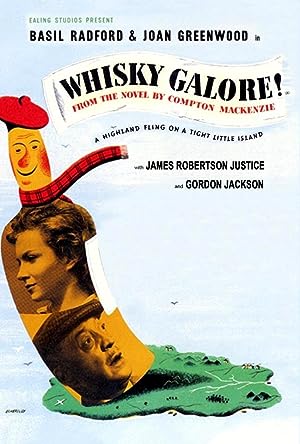 Synopsis: Based on a true story. The name of the real ship, that sunk Feb 5 1941 - during WWII - was S/S Politician. Having left Liverpool two days earlier, heading for Jamaica, it sank outside Eriskay, The Outer Hebrides, Scotland, in bad weather, containing 250,000 bottles of whisky. The locals gathered as many bottles as they could, before the proper authorities arrived, and even today, bottles are found in the sand or in the sea every other year.
Genre: Comedy, Crime
Director(s): Alexander Mackendrick
Actors: Basil Radford, Catherine Lacey, Bruce Seton, Joan Greenwood
Production: Universal Pictures
Nominated for 1 BAFTA Film Award. Another 1 win.

And what would be wrong with them?

One of them thinks she's going to marry herself.

- I believe it will be

What are you saying Joseph?

It's Catriona that is going to marry George Campbell.

Aye, Maybe it is.

Amn't I after telling you dozen times, Mr Waggett,

that I cannot accept explosives on this ship!

Captain MacKechnie it is my duty to see that I am in a state of full defence.

How can I defend myself if my cartridges

do not fit my rifles?

It would be a bit awkward, right enough.

Awkward? It's more than awkward!

This kind of thing lead to the full of France.

The ammunition arrived on the Island Queen!

Yes Yes, but Captain MacKechnie did not know then

that they was explosives.

If I had known I'd have never have brought them.

Don't you understand that I cannot get any.300

I had a wire from Obaig this morning.

Would it be all the same

rifles and kept the.303 ammunition?

Then you could ask them to send the.300 rifles

It would not be the same thing at all!

I'd rather have rifle and no ammunition

than ammunition and no rifles.

If I could make a suggestion, sir, we

could leave the stuff at Mr Macroon's shop.

Then you could take it up with Headquarters.

Not without a guard!

Now, finish of your compositions, children.

Don't make too much noise.

Is there anything the matter, mother?

To think that I should be hearing from others

that my own son is going to be married!

George Campbell, is this true?