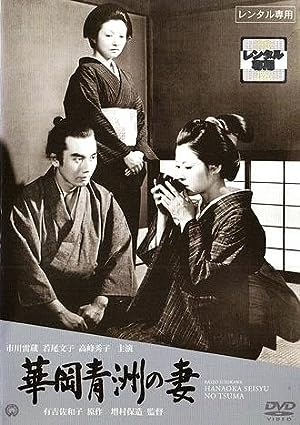 Presented for the 1967 Arts Festival

Kae was 8 when she first saw Otsugi.

She was with her nurse Tami and peeked into the herb garden behind the house.

She's not just beautiful. They say she's clever too, Everyone speaks well of her.

Otsugi's father, Naomichi, was a poor doctor and very unkempt in appearance

He would come down from Hirayama and visit Kae's house.

Her grandfather was retired and enjoyed Naomichi's bragging and tales ...

Kae could never believe this man was the husband of the beautiful Otsugi.

You and Otsugi are a real beauty and the beast combination.

You did well marrying her.

... but she was the carefully protected daughter of a big land owner who dealt in indigo and dyed cloth

She was well out of my league.

But then there was a godsend illness.

She was 16 and had a terrible skin condition which all the doctors tried but failed to cure.

I seized my chance and forced my way into the house ...

... saying I would try to cure her and if I succeeded they should let me marry her.

I used the Dutch medicine I'd studied in Nagasaki and wangled myself a wife!

You're a cunning devil.

But a doctor's job is to save his patients

When a patient dies I always wonder how I might have saved them...

... my regret is enormous if I lose someone.

Anyway, I though I could get a beautiful and clever wife and we will have a kid who'll be a better doctor than me.

So I worked frantically to cure her.

Fortunately Unpei is a splendid son.

He's a brilliant doctor so my plan has borne fruit.

Listening to your bragging really helps me sleep!

Otsugi next came to Kae's house 3 years later in the late spring.

He's rather down about the death and it's aged him. So I've come to as his representative.

What is this about?

This is very unexpected.

Unpei's in Kyoto now, isn't he?

Yes, he went this spring and will be back in 3 years with good training

Ir's my duty to find him a wife who can help him make the most of this.

The first thing a doctor's wife needs is good health, the second is to be firm.

A farmer's daughter shocked by the sight of pus or blood is not going to cope with life as a doctor's wife.

A merchant's daughter will be no good either. There's no call for toting up accounts on the abacus ...

... illness comes without respecting wealth and patients who can't pay are common.

You are respected samurai with a large stipend and a long family history - and Kae would be the ideal wife.

This was unexpected so I want time to think before I reply.

Perhaps it is presumptuous for a country doctor to make such a request but ...

Please ask if she she will marry uneventfully into a big family, or build a castle by developing a poor family ....

Please ask her from me whether she might consider that.

Our social difference is too high.

Hanaoka's bragging has even infected his wife it seems!

They say disease gets worse as it spreads! Otsugi is crazy!

None of the proposals to date have been pleasing.

Rather than Kae marrying into a big old family and suffering ...

That's true but isn't that Naomichi's idea rather than yours?

For generations our family has intermarried with the great families. I must maintain the tradition.

If the dowry worries you we can give her without one! Why not ask about that.

Sawako Ariyoshi (有吉 佐和子 Ariyoshi Sawako, 20 January 1931 – 30 August 1984) was a prolific female Japanese writer, known for such works as The Doctor's Wife and The River Ki. She was known for her advocacy of social issues, such as the elderly in Japanese society, and environmental issues. Several of her novels describe the relationships between mothers and their daughters. She also had a fascination with traditional Japanese arts, such as kabuki and bunraku. She also described racial discrimination in the United States, something she experienced firsthand during her time at Sarah Lawrence, and the depopulation of remote Japanese islands during the 1970s economic boom. more…

Discuss this The Wife of Seishu Hanaoka script with the community: