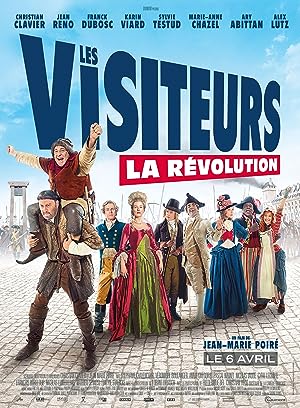 Citizens! The commissioner says you are enemies of the people!

English livery, showing that you are in the service of England.

and the Spanish style chain mail!

- Who's that ragamuffin? - An Englishman and firemaker.

- That livery with things was his. - Exactly!

In his pocket were sunglasses with mirrored lenses ...

to protect the eyes before another infernal machine.

Flacon of strange substance from England,

because it's written on there - spray!

Why did you steal all this? They think we are English! Asshole!

I and Englishman? Such a shame!

In the flacon, there is a hazardous gas.

It contains ink and produces music!

Silence! A capital punishment is called for and without delay.

If you have something to say, say it quickly.

I have the impression that they do not understand.

We are neither English nor spies!

You have no right to judge us!

- I am French, Jacquouille's word. - I do not understand! Your name is Frenchman,

My bastard arrested us. - What is bastard?

Although he is dirtier and more disgusting.

- And that huge oozing boil on his nose!

Scribe! Is the public prosecutor in Issoudun?

- I think he has a dinner in the company. - Whose?