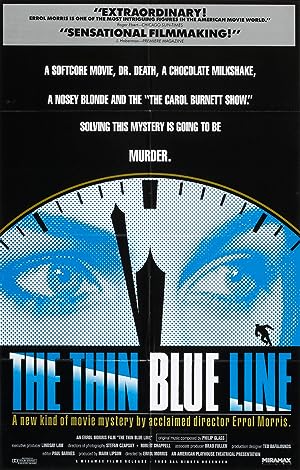 Synopsis: Errol Morris's unique documentary dramatically re-enacts the crime scene and investigation of a police officer's murder in Dallas, Texas. Briefly, a drifter (Randall Adams) ran out of gas and was picked up by a 16-year-old runaway (David Harris). Later that night, they drank some beer, smoked some marijuana, and went to the movies. Then, their stories diverged. Adams claimed that he left for his motel, where he was staying with his brother, and went to sleep. Harris, however, said that they were stopped by police late that night, and Adams suddenly shot the officer approaching their car. The film shows the audience the evidence gathered by the police, who were under extreme pressure to clear the case. It strongly makes a point that the circumstantial evidence was very flimsy. In fact, it becomes apparent that Harris was a much more likely suspect and was in the middle of a crime spree, eventually ending up on Death Row himself for the later commission of other crimes. Morris implies th
Genre: Crime, Documentary, Drama
Director(s): Errol Morris
Actors: Randall Adams, David Harris, Gus Rose, Jackie Johnson
Production: HBO Video
12 wins & 5 nominations.

Never once was I allowed a phone call.

Never once was an attorney there.

I don't know how long this had been.

I had smoked two packs of cigarettes

and had been out for a long time.

out of the car.

He left it in the car on the front seat...

that he was not going to write a ticket.

What he was probably going to do

was have them turn on the headlights.

He didn't know that the car was stolen.

I think that there's a very good chance...

that he was going

to check the driver's license...

and tell him to turn on his headlights,

and let the guy be on his way.

Officer Wood's wife had purchased him...

and had it under the Christmas tree.

Or had it stored away,

to give to him at Christmastime.

His partner was one of the first

that was assigned to patrol.

They were from the Northwest Station.

Working the graveyard shift and everything.

They had been into a fast-food

restaurant. And she had a malt.

This car came by, these

two dudes in it, with no lights on.

It wasn't a serious problem...

but he just pulled up,

turned his lights on to stop him.

Just to warn the man

that his lights were off.

Got out of the car and walked up.

Before he got to the window,

where the driver was...

he was in the right position.

This man just turned around and just...

with a little small-caliber pistol.

The first shot hit him in the arm.

He had his flashlight. It hit

the flashlight and went into his arm.

The next one hit him right in the chest.

The officer falls in the street

and he was in the first traffic lane.

He lay there and bled to death.

So she's out of the car.

She empties her pistol

at the fleeing suspect...

Errol Mark Morris (born February 5, 1948) is an American film director primarily of documentaries examining and investigating, among other things, authorities and eccentrics. He is perhaps best known for his 1988 documentary The Thin Blue Line, commonly cited among the best and most influential documentaries ever made. In 2003, his documentary film The Fog of War: Eleven Lessons from the Life of Robert S. McNamara won the Academy Award for Best Documentary Feature. more…

Discuss this The Thin Blue Line script with the community: