The Messenger: The Story of Joan of Arc

Synopsis: In 1412, a young girl called Jeanne is born in Domrémy, France. The times are hard: The Hunderd Years war with England has been going on since 1337, English knights and soldiers roam the country. Jeanne develops into a very religious young woman, she confesses several times a day. At the age of 13, she has her first vision and finds a sword. When coming home with it, she finds the English leveling her home town. Years after that, in 1428, she knows her mission is to be ridding France of the English and so sets out to meet Charles, the Dauphin. In his desperate military situation, he welcomes all help and gives the maiden a chance to prove her divine mission. After the successful liberation of Orléans and Reims, the Dauphin can be crowned traditionally in the cathedral of Reims - and does not need her anymore, since his wishes are satisfied. Jeanne d'Arc gets set up in his trap and is imprisoned by the Burgundians. In a trial against her under English law, she can't be forced to tell ab
Genre: Adventure, Biography, Drama
Director(s): Luc Besson
Actors: Rab Affleck, Stéphane Algoud, Edwin Apps, David Bailie
Production: Columbia Pictures
5 wins & 13 nominations.

Jeanne runs from the little church, the weight of her sins

now happily off her shoulders. Her reflection skips

across a little stream, then on through a meadow of

cowslips and buttercups and up the sloping hillside

A hazy, summer dusk -- pollen floating in the shimmering

air... Jeanne swirls between the high elms, happy and

carefree -- it's all a little surreal -- are those church

bells in the distance? Or cow bells? Or merely the SOUND

Jeanne swings round faster and faster, then tumbles over,

laughing, and lies on her back. She's dizzy and out of

breath. Above her, the clouds seeming to swirl as though

she were still spinning round...

The SOUND of the bells slows down, deepening... Her face

moves into shadow. Although not distinguishable as words

at this stage, there's an urgent whisper in the wind... a

strange echo that will eventually resolve into a call

Presently Jeanne turns and sees something glinting in the

long grass. A SWORD. The background SOUND of the bells

the sky -- then scores of them. She gets to her feet and

picks up the heavy sword. It's growing darker -- colder

-- the leaves have turned to autumn brown, now blown about

by a gust of wind.

Presently she sees a WOLF approaching, slowly but straight

toward her -- then two, three -- finally the whole pack.

She grips the sword, but can't use it -- too heavy, too

frightened. As the wolves approach, she closes her

The wolves pass either side of her, as though oblivious to

her presence. When she opens her eyes, they have passed,

and are now heading along the forest track.

Jeanne follows the wolves along the track. They're

heading toward a red glow, visible beyond the trees. The

wolves disappear over a ridge, though all we can see for

the moment is the red sky beyond. But as Jeanne reaches 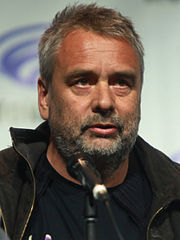 Luc Besson is a French film director, screenwriter, and producer. He directed or produced the films Subway, The Big Blue, and Nikita. more…

Discuss this The Messenger: The Story of Joan of Arc script with the community:

The Messenger: The Story of Joan of Arc