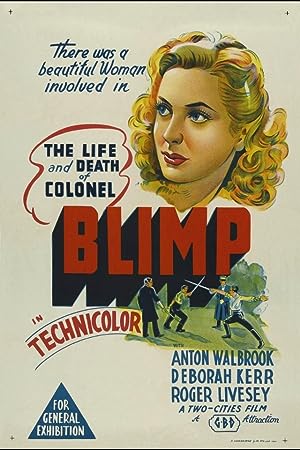 The Life and Death of Colonel Blimp

Synopsis: Portrays in warm-hearted detail the life and loves of one extraordinary man. We meet the imposingly rotund General Clive Wynne-Candy, a blustering old duffer who seems the epitome of stuffy, outmoded values. Traveling backwards 40 years we see a different man altogether: the young and dashing officer "Sugar" Candy. Through a series of relationships with three women and his lifelong friendship with a German officer, we see Candy's life unfold and come to understand how difficult it is for him to adapt his sense of military honor to modern notions of "total war."
Genre: Drama, Romance, War
Director(s): Michael Powell, Emeric Pressburger
Actors: Anton Walbrook, Deborah Kerr, Roger Livesey, Roland Culver
Production: Archers
1 win & 2 nominations.

But war starts at midnight!

How do you know the enemy says so too?

But, my dear fellow, that was agreed, wasn't it?

How many agreements have been kept

by the enemy since war began?

We agree to keep to the rules,

and they go on kicking us in the pants.

When I joined the Army,

the only agreement I made

was to defend my country,

not only by the National Sporting Club rules,

but by every means that have existed

They're counting on us to keep to the rules.

They openly boast about it!

..Watson, or whatever your name is,

you are not in Hyde Park,

with an audience of loafers.

I am Major General Wynne-Candy.

These other gentlemen have all seen service.

Distinguished service with the British Army.

that an army marches on its stomach...

You're an extremely impudent young officer,

but let me tell you that in 40 years' time

you will be an old gentleman too.

If your belly keeps pace with your head,

you'll have a bigger one than any of us.

but I doubt it, and I doubt if I'll have time

that 40 years ago I was a fellow of enterprise.

I'll punch your head for that, young fellow!

You young puppy! Put 'em up. Take that.

Think you can say what you like to an old 'un,

Do you know how many wars I've been in?

I was fighting for my country

when your father was still in bumfreezers!

You laugh at my big belly,

but you don't know how I got it.

You laugh at my moustache,

but you don't know why I grew it.

Michael Latham Powell (30 September 1905 – 19 February 1990) was an English film director, celebrated for his partnership with Emeric Pressburger. Through their production company "The Archers", they together wrote, produced and directed a series of classic British films, notably 49th Parallel (1941), The Life and Death of Colonel Blimp (1943), A Matter of Life and Death (1946, also called Stairway to Heaven), Black Narcissus (1947), The Red Shoes (1948), and The Tales of Hoffmann (1951). His later controversial 1960 film Peeping Tom, while today considered a classic, and a contender as the first "slasher", was so vilified on first release that his career was seriously damaged.Many film-makers such as Martin Scorsese, Francis Ford Coppola and George A. Romero have cited Powell as an influence. In 1981, he received the BAFTA Academy Fellowship Award along with his partner Pressburger, the highest honour the British Film Academy can give a filmmaker. more…

Discuss this The Life and Death of Colonel Blimp script with the community: