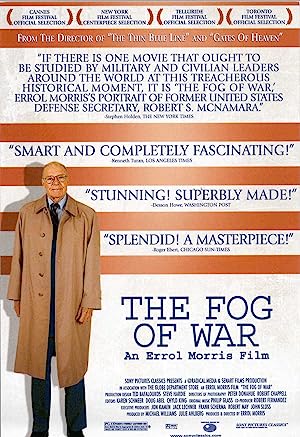 The Fog of War: Eleven Lessons from the Life of Robert S. McNamara

Synopsis: Former corporate whiz kid Robert McNamara was the controversial Secretary of Defense in the Kennedy and Johnson administrations, during the height of the Vietnam War. This Academy Award-winning documentary, augmented by archival footage, gives the conflicted McNamara a platform on which he attempts to confront his and the U.S. government's actions in Southeast Asia in light of the horrors of modern warfare, the end of ideology and the punitive judgment of history.
Genre: Biography, Documentary, History
Director(s): Errol Morris
Actors: Robert McNamara
Production: Sony Pictures Classics
Won 1 Oscar. Another 11 wins & 16 nominations.

...to put themselves back into that period.

In my seven years as secretary...

...we came within a hairs breadth

of war with the Soviet Union...

...for seven years as secretary

of defense, I lived the Cold War.

During the Kennedy administration,

they designed a 100-megaton bomb.

It was tested in the atmosphere.

I think the human race

needs to think more about killing...

Is that what we want in this 21 st century?

is of a city exploding with joy.

You may not believe

that I have the memory, but I do.

I remember the tops of the streetcars...

...being crowded with human beings...

...cheering and kissing and screaming.

But also celebrating the belief...

...that the world could avoid

great wars in the future.

Disputes among great nations would be resolved.

...that I wasn't allowed to go outdoors

to play with my friends...

...without wearing a mask.

There was an ungodly flu epidemic.

And millions across the world.

My class in the first grade was housed

in a shack, a wooden shack.

But we had an absolutely superb teacher.

And this teacher gave a test

to the class every month...

...and she re-seated the class

based on the results of that test.

There were vertical rows, and she put

the person with the highest grade...

...in the first seat on the left-hand row.

And I worked my tail off

to be in that first seat.

Now, the majority of the classmates

The Fog of War: Eleven Lessons from the Life of Robert S. McNamara