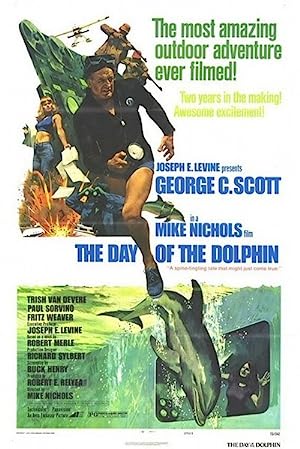 Synopsis: Dr Jake Terrell, who has been training a pair of dolphins for many years, has had a breakthrough. He has taught his dolphins to speak and understand English, although they do have a limited vocabulary. When the dolphins are stolen, he discovers they're to be used in an assassination attempt. Now he is in a race to discover who is the target, and where the dolphins are, before the attempt is carried out.
Genre: Drama, Sci-Fi, Thriller
Director(s): Mike Nichols
Actors: George C. Scott, Trish Van Devere, Paul Sorvino, John Dehner
Production: AVCO Embassy Pictures
Nominated for 2 Oscars. Another 1 win & 2 nominations.

I mean what can a

... about how his sonar works

about the functions of his language,

... about how he manages to maneuver

with such speed and dexterity,

... after millions of years

this species was compelled, or

Um, what about their

I saw this dolphin on television and he

counted from one to eight in English.

What do you suppose it was? Was it

some of trick or something?

Harold, I'm afraid we're gonna have to skip this drink.

I've got to get back to the island right away.

Nothing wrong I hope.

No nothing that can't be fixed.

Is there anything I can do to help?

Yes, you could ah, get the foundation to pay those bills

at Key Largo for me. I need that new equipment right away.

-Jake I have to talk to you about it.

Thank you so much, that was absolutely fascinating.

thank you... as I was saying I'd like to talk

about some of those bills.

Your getting weekly reports aren't you?

It's just that we are wondering about all the new recording equipment.

What are you using it for.

Recording, excuse me... I see.

the dolphins are making.

And trying to develop a highly

Look are we going over the budget?

Oh, then we'll try to be more careful. Thank you.

That your car? Yes.

Drop me off at the marina will you?

direction. -Tell him to drive fast. I'm in a hurry.

Drive fast, he's in a hurry.

... thanks for giving the speech.

Henry Zuckerman, credited as Buck Henry (born December 9, 1930), is an American actor, writer, film director, and television director. He has been nominated for an Academy Award twice, in 1968 for Best Adapted Screenplay for The Graduate and in 1979 for Best Director for Heaven Can Wait. more…