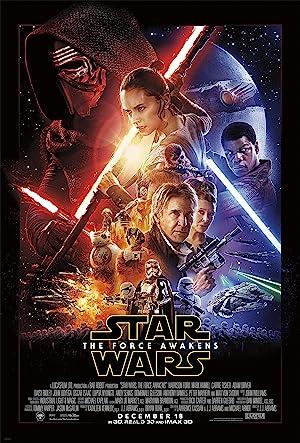 Synopsis: 30 years after the defeat of Darth Vader and the Empire, Rey, a scavenger from the planet Jakku, finds a BB-8 droid that knows the whereabouts of the long lost Luke Skywalker. Rey, as well as a rogue stormtrooper and two smugglers, are thrown into the middle of a battle between the Resistance and the daunting legions of the First Order.
Genre: Action, Adventure, Fantasy
Director(s): J.J. Abrams
Actors: Harrison Ford, Mark Hamill, Carrie Fisher, Adam Driver
Production: Walt Disney Pictures
Nominated for 5 Oscars. Another 57 wins & 123 nominations.

A long time ago in a galaxy far, far away...

Luke Skywalker has vanished. In his absence,

the sinister FIRST ORDER has risen from the

ashes of the Empire and will not rest until

Skywalker, the last Jedi, has been destroyed.

With the support of the REPUBLIC, General

Leia Organa leads a brave RESISTANCE. She is

desperate to find her brother Luke and gain

his help in restoring peace and justice to

Leia has sent her most daring pilot on a secret

mission to Jakku, where an old ally has

discovered a clue to Luke's whereabouts....

PAN across the star field to a bright moon. A RUMBLING is

FELT. A VAST STAR DESTROYER -- unlike any we have seen --

HURTLES PAST US, of seemingly endless length, eclipsing the

moon. After a long beat, FOUR TRANSPORT SHIPS fly from a

hangar. We HOLD ON THEM NOW, as they fly off toward a distant

planet. Jakku. MUSIC BUILDS AND WE...

A GROWING ROAR of MEAN ENGINES -- gnarled RADIO CALLS, the

SHUDDERING of a ship's hull. Then FLASHES OF LIGHT: for an

instant we see a STORMTROOPER -- then BLACKNESS. Then ANOTHER

STORMTROOPER, then it's gone.

The FLICKERING CONTINUES until the LIGHTS ARE CONSTANT. We

TWENTY STORMTROOPERS. Holding on at attention, moving to

the ship's rhythm, in the tense moments before a raid. A

FILTERED COMMAND and they LOCK AND LOAD their heavy blaster

rifles. The BRUTAL NOISE is replaced by SUDDEN, SHOCKING

WIDE SHOT of a small, peaceful village. Distant sounds of

Suddenly a DROID RISES INTO FRAME, CLOSE: ROUND and SKITTERY,

orange and white, this is BB-8.

Focuses on something past camera. He BEEPS -- FAST, MORSE

CAMERA -- is MORE worried -- BEEPS more -- then TURNS AND

CLOSE ON A HAND:
a small LEATHER SACK is placed in the palm.

The hand closes. Another OLDER HAND covers it.

kind) has handed the mysterious sack to POE DAMERON (32, in

a pilot's jacket). Poe has charisma, a natural spark:

This will begin to make things right.

I've traveled too far, and seen too

much, to ignore the despair in the

galaxy. Without the Jedi, there can

be no balance in the Force.

Well, because of you now we have a

chance. The General's been after

this for a long time.

Well, she certainly is that.

Submitted by acronimous on September 11, 2016

Discuss this Star Wars: The Force Awakens script with the community: