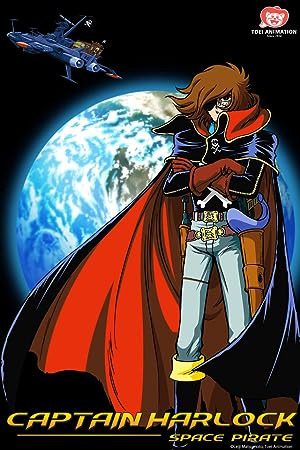 Synopsis: In 2977, mankind has space colonies, machines do all the work and everyone just wants to have fun. When deadly plant-based aliens that look like women attack the Earth in order to colonize it, only one rogue captain can stop them.
Genre: Action, Adventure, Animation
Actors: Makio Inoue, Akira Kamiya

The human race has spread across the galaxy, founding colonies on distant planets.

Their population increased, until it exceeded billions of inhabitants

But resources were exhausted, the birth rate collapsed, and the human race is now in an era of decay

A movement began that advocated a return to Mother Earth.

But the planet did not support repatriation

A huge conflict for the right to return started, known as

And a governmental structure was born, the "Gaia Coalition", to end the war.

The Gaia Coalition declared Earth to be "a sacred place" where no-one was allowed to enter.

The planet became a symbol to view from a distance, even as the colonists on planets were dying out.

There was, however, a man who resisted...

and continued to venture into the depths of space.

A space pirate, immortal in the last century, and challenging warships of the Federation.

Kids these days, they don't know any better.

thinking there's something out there for 'em.

The entire planet's gone in the crapper.

It's not the planet.

The whole human race is doomed.

Hope that can wait until I finish this bottle.

We weren't any different in my day.

Just dove in head first like lemmings into the sea.

Hurry, before it leaves!

But space is a monumental beast.

"In the vastness of space and the immensity of time",

we are less than a tiny speck.

What were we looking for out there?

We crossed the solar system, passed the Milky Way...

It didn't matter where we went.

We thought lightspeed travel will change our lives,

but it only made us realize the sad, hard truth.

We heard you're looking for recruits.

We want to enlist.

We only need one of you.

Why do you want to sail with us?

Don't ever forget this.

Freedom is what unites this ship.

All hands, prepare for departure!

You look after the new kid.

The human race is on the decline,

and there's no one out there to help.

No matter where we go, what we do...nothing's gonna change.

One man who will never stop moving forward.

We have a positive sensor reading!

Object of increasing mass detected in low orbit over MX-201.

The captain has taken the wheel!

Time to earn your keep,

Move it! Outta the way!

What's a patrol doing on this rock?

What CAN you do?

Then find a goddamn open gun!

All fighters, use extreme caution when approaching!

Hmph, a pirate ship. Not even a fighter plane to face us?

Watch your speed! It's coming at us!

Well, what do you know?

Discuss this Space Pirate Captain Harlock script with the community: