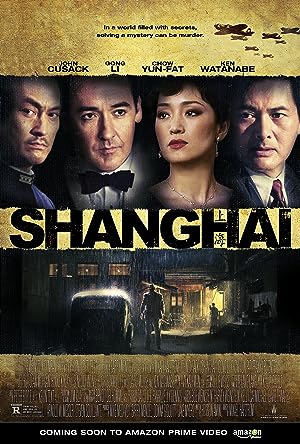 Synopsis: An American man returns to a corrupt, Japanese-occupied Shanghai four months before Pearl Harbor and discovers his friend has been killed. While he unravels the mysteries of the death, he falls in love and discovers a much larger secret.
Genre: Drama, Mystery, Romance
Director(s): Mikael Håfström
Actors: John Cusack, Li Gong, Yun-Fat Chow, David Morse
Production: The Weinistein Company

I guess he was on his way to meet you.

You know, this whole country has its head buried

The Germans are getting ready to march in Europe...

...and all we care about is whether or not the

I mean, what have we done with our lives?

I called Naval headquarters this morning.

I volunteered us both for Intelligence.

Conner and I had joined the Navy

Our lives were set.

He was investigating a local gang lord called

He's the boss of the Shanghai Triad.

He has a deal with the Japanese.

They leave him alone...

...and whenever the Japanese need any dirty work

done they go to him.

He hadn't briefed us in a month.

That's why I sent for you.

I was under a lot of pressure to have him reassigned.

Because the situation here

You got the Chinese fighting the Japanese.

Us, we're caught somewhere in the middle.

Now the truth is,

the Japanese want to walk into our zone...

...there's nothing we can do about it.

our only option is just to sit back and

not rock the boat.

And that wasn't Conner's style.

We've already spoken to him.

And I'll need an introduction to Lan-Ting.

Apart from his own people,

he only mixes with the Germans and the Japanese.

I know plenty of Germans.

When do I start at the Herald?

In Berlin, I played the part of a journalist

...and I was doing it again at the Shanghai Herald.

Hossein Amini (Persian: حسین امینی‎; born 18 January 1966) is a British-Iranian screenwriter and film director. Amini has worked as a screenwriter since the early 1990s. He was nominated for numerous awards for the 1997 film The Wings of the Dove, including an Academy Award for Best Writing – Adapted Screenplay. He also won a "Best Adapted Screenplay" award from the Austin Film Critics Association for his screenplay adaptation of Nicolas Winding Refn's Drive (2011), based on the novel by James Sallis. For his directorial debut, he both wrote and directed The Two Faces of January, an adaptation of the Patricia Highsmith novel. more…

Discuss this Shanghai script with the community: