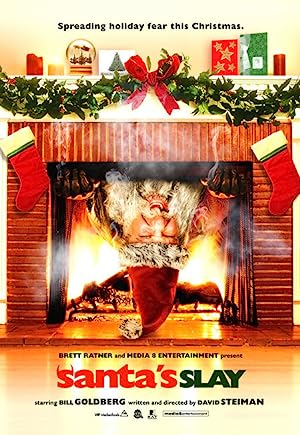 Been in the possession of our family | for countless generations.

What does it say?

I don't know why you're afraid | to use your Norse, Nicky.

If you don't practice it, you'll never | be able to speak it or read it.

"In the history of man, there have been | only two immaculate conceptions,

the first being God and the Virgin Mary | and the birth of their son, Jesus.

The second was Satan | with the Virgin Ericka

and the birth | of their son, Santa.

On the anniversary of his birth,

there were always a great number | of unexplained deaths and murders.

This day became known | as the Dag of Mord

or the Day of Slayings.

Eventually, Christianity spread | and when the Dag of Mord arrived,

the townspeople would have | a Mass of Christ or a Christ-Mass,

where they would pray | to their Lord for protection.

In the beginning | of the 11th century,

Carolers... I don't want them | singing around here.

My dad shot it this morning,

you know, with his | Ammo for Animals club.

It's so fresh, you can | almost smell its breath.

I didn't realize | I hadrt eaten a thing

I don't believe I've ever had | wolverine before.

I just hope it's not wicked cold.

What are you doing here?

You got me a gun?

I don't mean to sound ungrateful, | but what, are you fucking retarded?

It's more than meets the eye.

You said you always wanted one.

I'm as happy as a Make-a-Wish kid.

There are some people | who don't believe

Discuss this Santa's Slay script with the community: