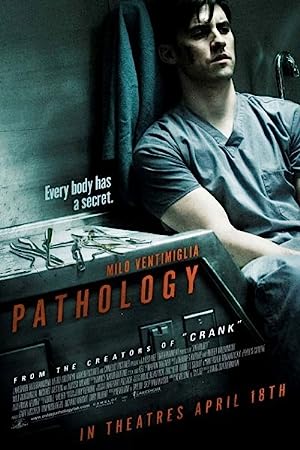 Synopsis: Harvard Medical School graduate Dr. Ted Grey arrives at one of the nations most prestigious Pathology programs and is quickly noticed by the program's privileged and elite band of pathology interns who invite him into their crowd. It is also here, where he is introduced to Dr. Jake Gallo, who brings him to a secluded wing, where he and four other indulge in their after-hours, extra-curricular activities...finding ways to commit the perfect murder!
Genre: Crime, Horror, Thriller
Director(s): Marc Schölermann
Actors: Milo Ventimiglia, Michael Weston, Alyssa Milano, Lauren Lee Smith
Production: MGM

- Excuse me. Pardon my interject.

- Given the boy's medical history, I believe

he died during a state of hypoxia and asthma attack.

Fresh out of medical books.

Oh forgive me, that seems more like a hypercondural

conclusion than an answer for the deceased.

been ridiculed at school for his weight.

The weight he started gaining when he began

of the steroid in blood or bladder.

- Is there a problem?

- He stop taking the steroid.

In his mind the abuse he suffered from his peers

for being fat was worse than the asthma itself.

Finally during a field-trip to the zoo,

he died from a severe attack.

when forming a diagnosis.

No question about it. Acute asthma.

I think it's coagulated nasal mucus.

Sorry man, I didn't see you there.

You wanted to know if there was a problem?

I think the guy still has a crush on you

Can't be too sure.

The place is beautiful.

Hey, I gotta get up in four hours,

Yeah, I love you too.

Alright everybody, gather around.

I want you to meet my friend Carl.

Now several weeks back, his doctors

- You're describing my weekend.

His symptoms increased in severity until

Mark Neveldine (born May 11, 1973) is an American film director, film producer, screenwriter and camera operator. He is best known for frequently collaborating with Brian Taylor as Neveldine/Taylor. more…