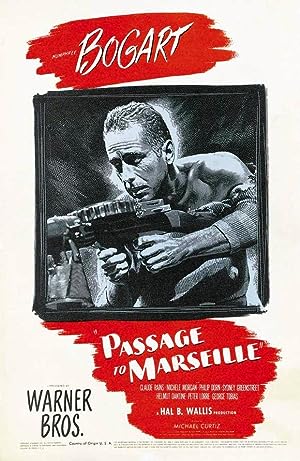 Synopsis: As French bomber crews prepare an air raid from a base in England, we learn the story of Matrac, a French journalist who opposed the Munich Pact. Framed for murder and sent to Devil's Island, he and four others escape. They are on a ship bound for Marseilles when France surrenders and fascist sympathizer Major Duval tries to seize the ship for Vichy.
Genre: Adventure, Drama, War
Director(s): Michael Curtiz
Actors: Humphrey Bogart, Claude Rains, Michèle Morgan, Philip Dorn
Production: Warner Home Video

in my judgments, Mr. Manning.

I try to remember that

and in the hands of the barbarians.

- You've seen him these late years?

Years ago, during the Battle of Verdun.

He visited our squadron, which was then

at Senard, at the foot of the Argonne.

You were flying in the last war?

Yes, I was a pilot

in the Escadrille Lafayette.

Why, you must have done your training

with us, Mr. Manning.

Here, come and have some dinner.

I, too, was a pilote de chasse

in Squad 26 of the Cigognes Group.

You know, many times did I see

of your squadron on patrol.

Now we meet for the first time.

you were an old pilote of our service,

we would have messed with the squadron.

Perhaps I can see them later.

Why, of course. They're in that room.

Have you noticed? Not a sound from them.

The laughter, the gay talk in every mess?

We find it hard to be merry.

- I understand they're bombers.

Although, we did begin here three years

ago with a few of our own Farmans.

They crossed the Channel as a unit

the day the armistice was signed.

And you came with them?

My dear Mr. Manning, you flatter me.

I'm getting along, and I'm blind in one eye.

No, no, I'm nothing but a liaison officer,

and I reached England by another route.

They're going out now.

Just to remind the Boche of our existence.

As soon as we finish, I'll take you down

Just over the rise and you can see them.

Kenneth Casey Robinson (October 17, 1903 – December 6, 1979) was an American producer and director of mostly B movies and a screenwriter responsible for some of Bette Davis' most revered films. Film critic Richard Corliss once described him as "the master of the art – or craft – of adaptation." more…