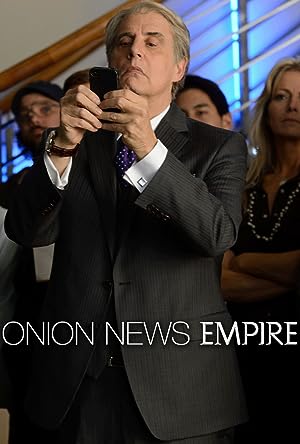 Synopsis: The journalists at the Onion News Network will do anything to stay at the top of their game. And if they can't find a great story, they'll create one.
Genre: Comedy
Director(s): Todd Strauss-Schulson
Actors: Jeffrey Tambor, Christopher Masterson, Aja Naomi King, William Sadler

- This is room temperature.

- No. I'm just a segment producer.

I always wanted to be a reporter,

but I failed the facial symmetry test.

I'm sure you could tell that my right eye

is 3/10 of a nano-milimeter lower than my left.

but he always wanted to be a national anchor.

One day, he was covering the unveiling

of the world's largest ball of twine.

A freak windstorm kicked up,

and the twine broke its moorings.

My dad was crushed to death under that giant twine ball.

But I worked hard,

and today, here I am,

so close to realizing his dream.

The moral is, beware of freak windstorms

and never give up.

- You know, the last guy that sat here

wanted to be an anchor too.

This is his resignation letter.

even Osama bin laden back when we liked him.

I was Bill Clintons personal guest at Camp David.

Over 22 people have taken the audio tour of my office.

And now you're telling me this pile of abs broke my streak?

- This award is for a little african boy named Balloo

that I interviewed for this story.

So in honor of Balloo,

I will not use my legs for the rest of the night.

That eighth should've been mine.

Order must be restored at this network.

You want dirt on Cameron Grey.

- I want to bring him to his knees

and pour wet hot dirt all over his face.

But I've heard you also have certain ethical lapses

But if I help you,you are going to owe me a favor.

Anything I want whenever I ask.

Discuss this Onion News Empire script with the community: