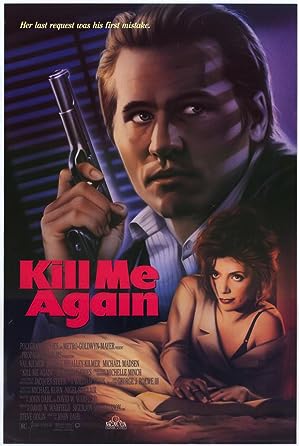 Synopsis: Fay Forrester, an attractive young lady wants to escape from her violent and jealous boyfriend Vince. So she hires Jack Andrews, a second class private investigator to arrange her death. She wants to restart her life with a new identity and the money she robbed together with Vince. Because of Jack's financial problems he joins Fay after her fake death. Unfortunately Vince finds out that Fay's still alive. The hunt for Jack, Fay and the money begins...
Genre: Action, Crime, Drama
Director(s): John Dahl
Actors: Pat Mulligan, Nick Dimitri, Michael Madsen, Joanne Whalley
Production: MGM Home Entertainment
1 win.

involved in a relationship.

He's not right in the head.

He's trying to kill me.

I don't love him anymore.

I tried to make that clear to him, but he won't accept it. and he won't leave me alone.

See, there's no one to protect me from him.

My folks are both passed away.

I don't have any other family.

There's no one I can turn to.

- And you've tried talking to the police?

- I can't prove anything.

- They can't arrest the guy unless he murders me.

I want you to kill me.

- I wanna make it look like I've been killed.

I made a real mess out of things.

I...I want Fay Forester to die, so I can take on a new identity.

Is that too much to ask?

It's not that easy. What you want me to do...is illegal. It's a kind of fraud.

This man is gonna kill me!

You think I care about fraud?

I'm just saying that it's not without a lot of risk.

Half now. The other half after I'm dead.

That's a lot of money to be carrying around.

I can't sleep at night.

I'm scared all the time.

The next time he finds me...

You have to help me!

Ms. Forester, are you telling me the truth?

This is from the last time I saw him.

Ten thousand's plenty. I'll take half now, and the other half when the job's done.

There's no guarantee it'll work, and you're gonna have to be honest with me.

Something about it don't seem right.

You think this girl is telling you the truth?

You should see her.

Anyway, her money's green either way.

Look, just cause you'd stick your neck out for a skirt in trouble, that don't mean that I have to.

John Dahl (born 1956) is an American film and television director and writer, best known for his work in the neo-noir genre. more…

Discuss this Kill Me Again script with the community: