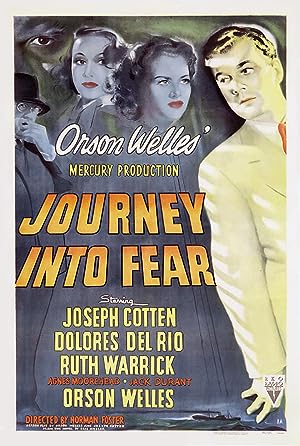 Synopsis: A Navy engineer, returning to the U.S. with his wife from a conference, finds himself pursued by Nazi agents, who are out to kill him. Without a word to his wife, he flees the hotel the couple is staying in and boards a ship, only to find, after the ship sails, that the agents have followed him.
Genre: Drama, Film-Noir, Thriller
Director(s): Norman Foster, Orson Welles
Actors: Joseph Cotten, Dolores del Rio, Ruth Warrick, Agnes Moorehead
Production: RKO Radio Pictures

can get any new guns.

That's why they're after me.

You've got me involved in a dirty nightclub shooting!

I've got to call my wife.

You've got to keep this out of the paper.

Howard, you are lucky. Just think what happened to that magician, suppose the trick hadn't worked?

It's entirely beside the point!

I've got no business in here.

Howard... they are only doing their official duty for your own good.

The whole thing's so stupid!

I can forgive almost anything but stupidity.

Wish I'd brought my topcoat...

This is a scandal!

We have no business with the police.

Maybe we won't get our pictures in the papers.

This is his office.

He's the head of the secret police.

He was a deputy in the Provisional Government in 1919. One of Ataturk's men.

There is a legend he can drink two bottles of whisky without getting drunk.

and throwing them in the river to save food and ammunition. But I don't believe it.

He is a great patriot!

But I wouldn't trust him with a woman...

You are Howard Graham?

You are employed by a munitions company in America?

You are employed by a munitions company in America?

This man can tell you all about it. He's the local agent.

You're a naval ordinance expert.

- I'm an engineer, and naval ordinance just happens to be my subject.

Your government has assigned you through your company to do some important work here.

Joseph Cheshire Cotten Jr. (May 15, 1905 – February 6, 1994) was an American film, stage, radio and television actor. Cotten achieved prominence on Broadway, starring in the original stage productions of The Philadelphia Story and Sabrina Fair. He first gained worldwide fame in three Orson Welles films: Citizen Kane (1941), The Magnificent Ambersons (1942), and Journey into Fear (1943), for which Cotten was also credited with the screenplay. He went on to become one of the leading Hollywood actors of the 1940s, appearing in films such as Shadow of a Doubt (1943), Love Letters (1945), Duel in the Sun (1946), Portrait of Jennie (1948), The Third Man (1949) and Niagara (1953). One of his final films was Michael Cimino's Heaven's Gate (1980). more…