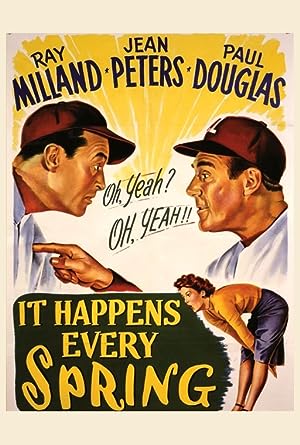 It Happens Every Spring

Synopsis: A college professor is working on a long term experiment when a baseball comes through the window destroying all his glassware. The resultant fluid causes the baseball to be repelled by wood. Suddenly he realizes the possibilities and takes a leave of absence to go to St. Louis to pitch in the big leagues where he becomes a star and propels the team to a World Series appearance.
Genre: Comedy, Sci-Fi, Sport
Director(s): Lloyd Bacon
Actors: Ray Milland, Jean Peters, Paul Douglas, Ed Begley
Production: 20th Century Fox Film Corporation
Nominated for 1 Oscar. Another 1 nomination.

director of the research labratory.

Yes, I intend to submit his name

to you and the board.

That is, as soon as he

But, he's no youngster, Joe.

He should've had his PhD years ago.

Well, he spent 3 years in the South Pacific.

And before that he worked on

a number of other ideas.

Are you being absolutely honest with me, Joe?

Are you sure there's nothing else?

No, no. It's just these phases that he goes through.

Phases? What do you mean, phases?

conscientious, and an excellent teacher.

But every spring he seems to

He becomes absent-minded to a degree.

only it lasts all summer.

He's been around our house quite a bit lately.

I haven't noticed these symptoms.

It's past the middle of April now.

Only, this is just the time of the year.

I'm expecting it to hit him almost any time.

It happens every spring.

Continuing our study of the

we are now coming to a

The most striking difference

between the various acids

containing the carboxylate group lies in their

Some fairly active, while others. . .

I have in this test tube acetic acid.

it's a rather weak acid of low Ka value.

Which tells us that acetic acid

Valentine Loewi Davies (August 25, 1905 – July 23, 1961) was an American film and television writer, producer, and director. His film credits included Miracle on 34th Street (1947), Chicken Every Sunday (1949), It Happens Every Spring (1949), The Bridges at Toko-Ri (1954), and The Benny Goodman Story (1955). He was nominated for the 1954 Academy Award for Best Original Screenplay for The Glenn Miller Story. Davies was born in New York City, served in the Coast Guard, and graduated from the University of Michigan where he developed his writing skill with a column in the Michigan Daily and honed his skills further as a graduate student at Yale Drama School. He walked away from his family's successful real estate business in New York and moved to Hollywood to become a screenwriter. He wrote a number of Broadway plays and was president of the Screen Writers Guild and general chairman of the Academy Awards program. He wrote the story for the 1947 film Miracle on 34th Street, which was given screen treatment by the director, George Seaton. Davies also did a novelization of the story, which was published as a novella by Harcourt Brace & Company in conjunction with the film release. Miracle on 34th Street earned him an Academy Award for Best Story. From 1949-50, he served as President of the Screen Writers Guild. He died in 1961 at his home in Malibu, California when he was fifty-five years old. His secretary at the time of his death, Marian Saphro, recalled many years later that her boss died in the midst of a heavy laugh. The Valentine Davies Award was established in 1962, the year following his death, by the Writers Guild of America, West, in his honor. It has been awarded annually, excepting the years 2006, 2010, and 2015. more…