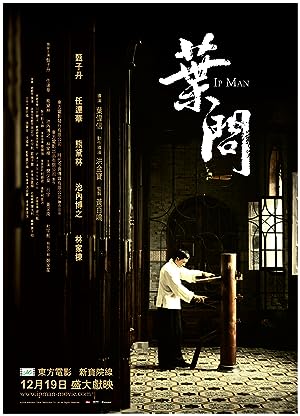 Synopsis: In 1935 in Foshan, south China, there are martial arts schools on every street corner. Ip Man is the undisputed martial arts champion, yet he has not devoted himself to teaching. Despite this, it seems that all the kung fu masters of the city are eager to fight him to improve their reputation.
Genre: Action, Biography, Drama
Director(s): Wilson Yip
Actors: Donnie Yen, Simon Yam, Lynn Hung, Hiroyuki Ikeuchi
Production: Well Go USA
12 wins & 16 nominations.

The cost of things in Fuoshan have risen

So what about it?

That is to say, Fuoshan's economy is good

Everyone have expendable income

In future, the demand for cloth will be huge

That is why I want to set up a cotton factory

so that I can supply them to the cloth factory

I want you to be my partner

I am not suitable for business

It's okay, I am suitable

I am not in need money

Who is Sha Dan Yuan? Get the hell out here!

You're the one talking nonsense and ruining my reputation?

I want to teach you a lesson today

Your brother is talking nonsense and ruined my reputation

Said I lost to Ip Man in a fight

Tell me, how can I survive in Dojo Street?

How can I open my dojo and take in students?

I am not in the wrong. I just stating facts

Ip Man is upstairs. If you've got the balls, go find him!

that you have a duel with Master Liao

Master Ip, you must clear my name

I did not lie

When I was retrieving my kite, I saw them fighting

What a coincidence that your kite broke loose

and landed in Brother Man's garden

and coincidentally, the whole scene was seen by you?!

There is just too much coincidences!

Yes, it's all coincidences

Even if it's true, you can't go around telling everyone

There are some things which one can't admit