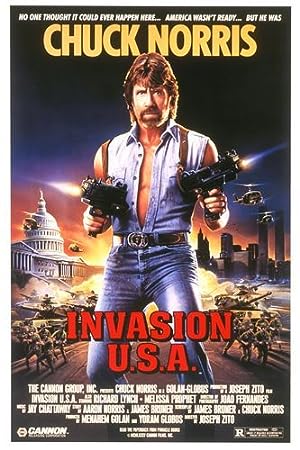 Synopsis: A terrorist, Rostov, is planning to unleash a reign of terror on the U.S.. But before he does he decides to go after Matt Hunter, a former CIA agent who lives in Florida. Hunter once had Rostov's life in his hands, but on orders took him alive, and now Rostov is plagued by nightmares of Hunter killing him. So Rostov goes after him but misses, so Hunter, who has already been approached by his former employers to go after Rostov, after initially turning down the job, because he believed that they should have let him terminate Rostov when he had the chance, decides to go after him. But he is only one man and Rostov has hundreds of men ripping the country apart, so how will he stop it?
Genre: Action, Thriller
Director(s): Joseph Zito
Actors: Chuck Norris, Richard Lynch, Melissa Prophet, Alexander Zale
Production: Cannon Films Inc

America has not been invaded by|a foreign enemy in nearly 200 years.

Look at them, Nikko.

They don't even understand|the nature of their own freedom

or how we could use it against them.

They are their own worst enemy.

But they don't know it.

Hey, what the hell is that?

Who cares? Race you to the blanket.

Whenever they operate on Liz Taylor,|I'm right outside the door.

Anything she doesn't want...

Throw it over. Son of a gun.

- What has she got on?|- Liberace's underwear.

America will be a different place.

But remember, I work alone.

Now, if anything goes wrong,|we don't know who you are.

- What are you doing?|- Gonna pay the check?

Give me the damn thing.

- No trace of drugs, sir.|- This isn't a drug-smuggling operation.

Where were they made?

In the States.|I have the serial numbers.

Contact the DOD surplus sales office.|Start running down the buyer.

You got your work cut out for you,|don't you?

This is big, real big.

Got any words of wisdom|for the press?

Right. Well, let me rephrase it.

You got any idea|what the hell's going on around here?

Daddy, can I put the star up this year?