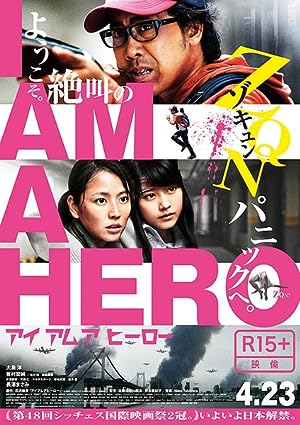 Synopsis: One day, after returning from work late in the evening, Hideo witnesses a traffic accident in which a car crashes into a nearby pedestrian, killing the victim instantly. However, despite severe injuries including a broken neck, the victim's body stands up and walks away. Hideo questions whether this is another one of his hallucinations, but strange events begin happening around him.
Genre: Action, Horror
Director(s): Shinsuke Sato
Actors: Masami Nagasawa, Yô Ôizumi, Kasumi Arimura, Miho Suzuki
Production: Avex Pictures
6 wins & 2 nominations.

(Onto the next story.)

(On a road in Hiroshima city)

(A 45 year old woman was seriously bitten by a Tosa dog.)

(This Tosa dog is one meter long.)

(It was subdued by 3 police officers who received the call.)

(This incident happened on a road in Fukushima city, Showa town.)

(The reason behind biting is still being investigated.)

(The woman was saying gibberish at the time.)

(So the police will ask experts for a psychological profile.)

(This would decide whether the she would be held responsible.)

But, man, what should I do?

Why not just waltz right in?

Eh? Mitani, would you go?

A high school reunion? Of course not.

Haven't made any money.

Why would I want to drink with those people in suits?

(It's not "seriously bitten by a Tosa dog.")

(We apologize for the incorrect information.)

But there's a girl I want to meet again.

(A 35 year old jobless man was arrested due to performing obscene acts.)

It can't be Suzuki, right?

A manga assistant is no different than being jobless, no?

From the perspective that both accomplish nothing.

Suzuki will too become a criminal, huh.

Do you know what the peak of Japanese culture is?

Due to the language barrier and culture differences

It's hard to take the lead in the world. It's too limited.

The same can be said for music.

Japanese manga is the world standard.

It's a piece of culture worth bragging.

Being a manga assistant isn't sad.

This is the place, where we lead the world's trend.

Guess it's my loss.

Stop talking to yourself.

Hey, is the City Hall ready?

Then bring it in here.

I'll check it in this room.

(As expected, men who don't work hard are useless.)

(And if they are still useless after they try...)

(They were useless before anyway...)

(I'm not talking about income.)

(Umm, even if they don't earn much)

(and are living with their girlfriends)

(they shouldn't bring trouble for their girlfriends.)

(Should go look for a part-time job)

(If they don't let their girlfriends see their manly side now...)

(then when will they do it?)

(For the sake of their girlfriends)

(they should show some gratitude for everything their girlfriends did.)

(Sometimes he would apologize.)

(How should I put it)

(Is it good to keep dragging things on?)

(The road ahead will be named the Suzuki Way!!)

if you aren't working.

Just looking for some inspiration.

Why not sell it?

We have no money to spend on hobbies.

I'll get published next time.

Then I'll get serialized all in one go.