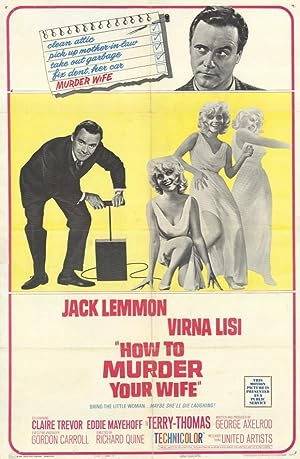 How to Murder Your Wife

Synopsis: Stanley Ford leads an idyllic bachelor life. He is a nationally syndicated cartoonist whose Bash Brannigan series provides him with a luxury townhouse and a full-time valet, Charles. When he wakes up the morning after the night before - he had attended a friend's stag party - he finds that he is married to the very beautiful woman who popped out of the cake - and who doesn't speak a word of English. Despite his initial protestations, he comes to like married life and even changes his cartoon character from a super spy to a somewhat harried husband. When after several months he decides to kill off Bash's wife in the cartoon, his wife misinterprets his intentions and disappears. Which leads the police to charge him with murder.
Genre: Comedy
Director(s): Richard Quine
Actors: Jack Lemmon, Virna Lisi, Terry-Thomas, Eddie Mayehoff
Production: MGM Home Entertainment
Nominated for 1 BAFTA Film Award. Another 1 win & 1 nomination.

But I was thinking of Mr Lampson.

Stanley, can you stop for just a minute?

I'm speaking to you now as your friend!

You're a grown man, and grown men

Will you stop just a minute, Stan.

She had a diamond in her navel.

And those demented butlers

and criminals with knives!

You cannot continue comporting yourself

Because it's hard-core pornography

softened slightly, ever so slightly,

by excessive violence and sadism!

Bash Brannigan is enjoyed by millions

I'd never ask Bash to do anything

I hadn't done myself.

I wanna remind you, lad,

it's time that you settled down.

Edna and I were discussing it last night

I agree -there's something almost immoral

about a man of your age who isn't married,

doesn't go to an office,

sits around drawing a comic strip

that appeals only to morons, Stanley!

Stanley? Stanley, are you listening?

I happened to mention to the kids that I was

gonna be meeting with you this afternoon,

and, well, we kind of have a little family

argument there that we want you to settle.

The point is that Hal and Tommy both think

that the microfilm is hidden

in the diamond in the girl's navel.

Of course, I told them they were crazy.

In fact, I went out on a limb.

I told them that I was your lawyer

George Axelrod (June 9, 1922 – June 21, 2003) was an American screenwriter, producer, playwright and film director, best known for his play, The Seven Year Itch (1952), which was adapted into a movie of the same name starring Marilyn Monroe. He was nominated for an Academy Award for his 1961 adaptation of Truman Capote's Breakfast at Tiffany's and also adapted Richard Condon's The Manchurian Candidate (1962). more…

Discuss this How to Murder Your Wife script with the community:

How to Murder Your Wife