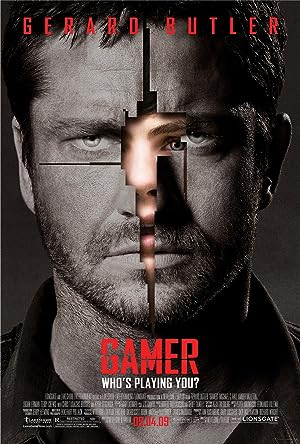 Synopsis: Ken Castle is extremely rich, popular and powerful since he invented and started exploiting the virtual online parallel reality games, in which people can either pay as user or be paid as 'actor' in a system of mind-control. The ultimate version, Slayers, fields death row convicts as gladiators in a desperate dim bid for survival, which no-one made yet. The champion, John 'Kable' Tillman, was scheduled to die just before he'ld gain release, but he persuades his teenage 'handler' to hand over the reins so he can fully use his talents and experience. Thus Kable escapes to freedom, only to be chased illegally by Castle's men, yet fights back all the way to his HQ and challenges his evil hidden plans.
Genre: Action, Sci-Fi, Thriller
Director(s): Mark Neveldine, Brian Taylor
Actors: Gerard Butler, Amber Valletta, Michael C. Hall, Kyra Sedgwick
Production: Lionsgate Films
1 win.

Let's talk about the so called "genericons".

Sent into the Slayers environment,

With a set of pre programmed actions,

with no one controlling them,

and no way to react, their chances

of survival next to nil?

shouldn't they be given the same chance,

roll the dice for a ticket out?

Besides they only need to survive

how the hell does it work?

It begins with a single nano cell

planted in the motor cortex of the brain.

This cell can replicate,

replacing the cells around it

Is it true, that every human that undergoes this procedure,

will have a distinct "ip" address,

- or a notebook computer?

But control is strictly localized with the parameters of our gaming environment.

You take "Society" for instance.

Once our cast member has left the workplace they're completely free,

from the control and monitoring of their player.

Don't you suspect some folks wouldn't mind a bit of controlling?

Someone else making all the decisions for you?

No tough choices, no responsibilities?

Can I just tell you, I cannot wait until the next Slayers,

I mean, Kable has been unbelievable!

well I know they're terrible!

What the hell is that?

Ken Castle wants you to believe that

we are living in a better, safer world.

- His a liar! When mind controlling his Slayers...

Mark Neveldine (born May 11, 1973) is an American film director, film producer, screenwriter and camera operator. He is best known for frequently collaborating with Brian Taylor as Neveldine/Taylor. more…

Discuss this Gamer script with the community: