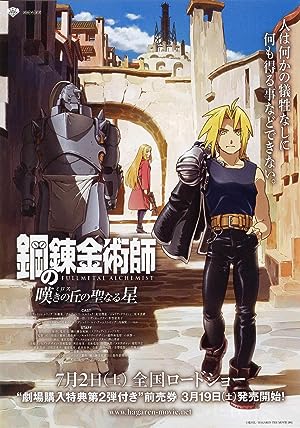 Synopsis: In the lost holy land of Milos, the Elrics search for the truth behind an unknown form of alchemy. What secrets are hidden in Milos? Riddles must be solved and dangers faced before the truth can be found.
Genre: Action, Adventure, Animation
Director(s): Kazuya Murata
Actors: Vic Mignogna, Maxey Whitehead, Alexis Tipton, Matthew Mercer
Production: Eleven Arts
4 wins & 5 nominations.

There was an Alchemist in the collective ward?

Yes. He bit his fingers and drew

Transmutation Circles with his blood.

So he was treating the prison as his villa?

The military police have closed off all the main roads.

However, we have yet to find him.

What are they doing here?

This is way too much destruction.

He was convicted of robbery and assault four and a half years ago and sentenced to five years in prison, which he was serving.

Convicted four and a half years ago and sentenced to five years?

He would've been released on parole in two months.

Just a little longer, and he'd have been free.

He sure has no patience.

Why wasn't such a dangerous criminal placed in an isolated cell-

Nobody knew he could use Alchemy, no?

We were eating dinner and listening to the radio.

Then he suddenly bit his own fingers...

What was he doing before he drew the Transmutation Circles with his blood?

He was reading his newspaper, as always.

Look, this rip is way too clean to

have been made during the chaos.

This is an article on the third page of the

So he cut out this photo.

You know about it, Al?

It's a city on the border between Cleta and the western part of Amestris.

But why did he quietly stay in prison all this time?