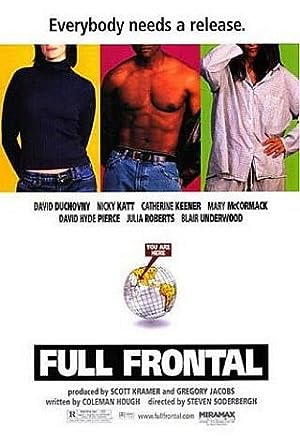 and narrate a documentary | about some guy's life,

and go home from work | and have dinner,

and go to bed and go back | to work in the morning,

So, what's on for today?

ARTHUR:
Nobody I know...

is in any kind | of long-term relationship...

with anybody they've met | on the internet...

but the short-term stuff | have been pretty exciting.

She thinks I'm twenty-two | years old, and I'm not.

I'm not a painter, | although I'd like to paint.

So, it could be anything.

I mean, the imagination | could take you anywhere.

I find that | really, really exciting.

And it's one of those places | where I can lie.

LINDA:
I'm happy with | meeting men on the computer...

on the internet, | in the chat rooms.

And, you know, | people disappoint...

I really connected | with somebody.

five years from now, I'd like | to be living there with him.

and I didn't lie.

I lied a little about my age...

So, I just knocked | a few years off of that.

It was that kind of thing,

It just... you know, | everything clicked,

You transcribe those yourself?

And don't tell me | you're not gonna say,

Do you want to know | if he's straight?