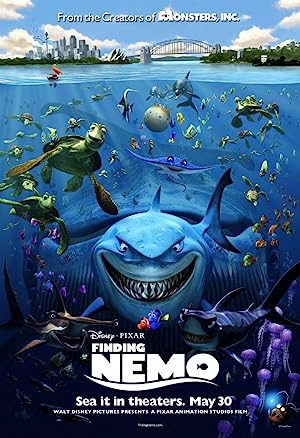 Synopsis: A clown fish named Marlin lives in the Great Barrier Reef loses his son, Nemo. After he ventures into the open sea, despite his father's constant warnings about many of the ocean's dangers. Nemo is abducted by a boat and netted up and sent to a dentist's office in Sydney. So, while Marlin ventures off to try to retrieve Nemo, Marlin meets a fish named Dory, a blue tang suffering from short-term memory loss. The companions travel a great distance, encountering various dangerous sea creatures such as sharks, anglerfish and jellyfish, in order to rescue Nemo from the dentist's office, which is situated by Sydney Harbor. While the two are doing this, Nemo and the other sea animals in the dentist's fish tank plot a way to return to Sydney Harbor to live their lives free again.
Genre: Action, Adventure, Animation, Children, Comedy, Family, Fantasy
Director(s): Andrew Stanton, Lee Unkrich (co-director)
Actors: Albert Brooks, Ellen DeGeneres, Alexander Gould, Willem Dafoe
Production: Walt Disney Pictures
Won 1 Oscar. Another 48 wins & 61 nominations.

If I ever meet a sea turtle, I'll ask him.

After I'm done talking to the shark, OK?

Whoa! Hold on. Wait to cross.

Dad, you're not going to freak out... like you did at the petting zoo, are you?

That snail was about to charge.

Hmm. I wonder where we're supposed to go.

I'll pick you up after school.

Come on, you guys, stop it! Give it back!

Come on, we'll try over there.

Excuse me, is this where we meet his teacher?

Well, look who's out of the anemone.

Bill. Hey, you're a clownfish.

You're funny, right? Tell us a joke.

Clownfish are no funnier than any other fish.

Come on, clownie. Do something funny.

All right, I know one joke.

There's a mollusk, see? And he walks up to a sea-

He doesn't walk up, he swims up.

He's in one place, and then the sea cucumber...

There was a mollusk and a sea cucumber.

None of them were walking, so forget that I-

Sheldon! Get out of Mr. Johannsen's yard now!

Whoa! All right, you kids!

I would feel better if you'd play on the sponge beds.

That's where I would play.

What's wrong with his fin? He looks funny.

Be nice. It's his first time at school.

He was born with it. We call it his lucky fin.

It's actually shorter than all my other tentacles... but you can't really tell.

Come on, Nemo. You better stay with me.

Andrew Stanton (born December 3, 1965) is an American film director, screenwriter, producer and voice actor based at Pixar, which he joined in 1990. His film work includes writing and directing Pixar's A Bug's Life (1998) (as co-director), Finding Nemo (2003) and its sequel Finding Dory (2016), WALL-E (2008), and the live-action film, Disney's John Carter (2012). He also co-wrote all three Toy Story films and Monsters, Inc. (2001) Finding Nemo and WALL-E earned him two Academy Awards for Best Animated Feature. He was also nominated for three Academy Awards for Best Original Screenplay, for Finding Nemo, WALL-E, and Toy Story (1995), and for an Academy Award for Best Adapted Screenplay for Toy Story 3 (2010). Stanton also directed the sequel to Finding Nemo, Finding Dory, which was released in June 2016, and two episodes of the series Stranger Things in 2017. more…