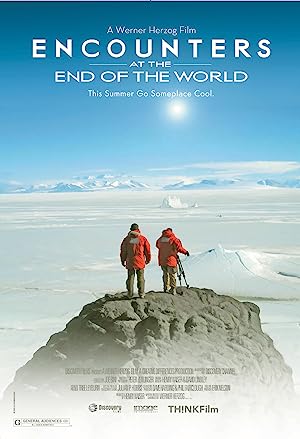 Encounters at the End of the World

Synopsis: 'Werner Herzog' takes his camera to Antarctica where we meet the odd men and women who have dedicated their lives to furthering the cause of science in treacherous conditions. A scientist studies neutrinos, which are everywhere, yet elusive; he likens them to spirits. A researcher's nighttime performance art includes contorting her body into a luggage bag. A survival guide teaches his students to survive white-out conditions by wearing cartoon-face buckets over their heads. Animal researchers milk mother seals as part of their study. Volcanologists offer advice on what to do when a volcano erupts. A pipefitter shows us the anomaly in his hands that he says are a sign he descended from Atzec royalty. A former Colorado banker drives what he has christened Ivan the Terra Bus. An underwater diver shows his colleagues DVDs of apocalyptic sci-fi films like Them! (1954). And -- though Herzog declares he's not "making another film about penguins" -- we meet a penguin researcher who answers the
Genre: Documentary
Director(s): Werner Herzog
Actors: Werner Herzog, Scott Rowland, Stefan Pashov, Doug MacAyeal
Production: ThinkFilm
Nominated for 1 Oscar. Another 2 wins & 14 nominations.

and just outside is the environment

that Scott and Shackleton first faced

when they came here about 100 years ago

Unlike Scott and Shackleton, who viewed

the ice as this sort of static monster

that had to be crossed

to get to the South Pole,

we scientists now are able to

see the ice as a dynamic living entity

that is sort of producing change,

For me, it's been a wild ride

First of all, I found out that the iceberg

that I came down to study

not only was larger than the iceberg

that sank the Titanic,

it was not only larger than the Titanic itself,

but it was larger than the country

that built the Titanic

is the white cliff It's about 150 feet tall,

so that means that there's over

This iceberg is so big

that the water that it contains

would run the flow of

It's so big that the water that is inside of it

would run the river Nile for 75 years

MacAYEAL This is a little bit

of video that we shot

when we were flying up to the iceberg

It looks big and it looms above us,

even if we're on an aircraft

flying above the iceberg,

the iceberg is always above us

It's above us because it's a mystery

that we don't understand

Here's a picture of what it looked like once

we had arrived in the center of the iceberg

We put out our instruments

Now we're gonna have an opportunity

to monitor how the iceberg drifts north

They're so big, there's an element of fear

what's going to come ahead

when they eventually begin to melt

in the ocean beyond Antarctica

is a time-lapse sort of animation

of satellite imagery of the sea ice

and of the continent of Antarctica

And what you see are three shades of gray

Werner Herzog (German: [ˈvɛɐ̯nɐ ˈhɛɐ̯tsoːk]; born 5 September 1942) is a German screenwriter, film director, author, actor, and opera director. Herzog is a figure of the New German Cinema, along with Rainer Werner Fassbinder, Margarethe von Trotta, Volker Schlöndorff, Werner Schröter, and Wim Wenders. Herzog's films often feature ambitious protagonists with impossible dreams, people with unique talents in obscure fields, or individuals who are in conflict with nature.French filmmaker François Truffaut once called Herzog "the most important film director alive." American film critic Roger Ebert said that Herzog "has never created a single film that is compromised, shameful, made for pragmatic reasons, or uninteresting. Even his failures are spectacular." He was named one of the world's 100 most influential people by Time magazine in 2009. more…

Discuss this Encounters at the End of the World script with the community: