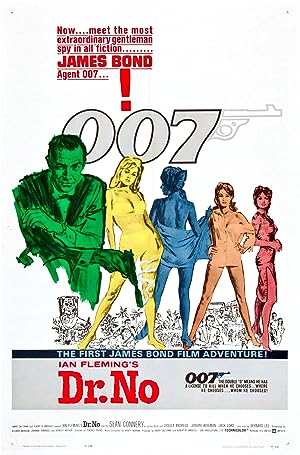 Synopsis: James Bond (007) is Britain's top agent and is on an exciting mission, to solve the mysterious murder of a fellow agent. The task sends him to Jamaica, where he joins forces with Quarrel and a loyal CIA agent, Felix Leiter. While dodging tarantulas, "fire breathing dragons" and a trio of assassins, known as the three blind mice. Bond meets up with the beautiful Honey Ryder and goes face to face with the evil Dr. No.
Genre: Action, Adventure, Thriller
Director(s): Terence Young
Actors: Sean Connery, Ursula Andress, Joseph Wiseman, Jack Lord
Production: United Artists
Won 1 Golden Globe. Another 1 win & 4 nominations.

It happens to be 3am.

Never on the firm's time, sir.

Jamaica went off the air tonight,

in the middle of the opening procedure.|We've checked and...

So has his secretary.|A new girl. We'd only just sent her out.

Was Strangways on something... special?

He was checking|an enquiry from the Americans.

They complained about interference|with their Cape Canaveral rockets.

They think it comes|from the Jamaica area.

- Does "toppling" mean anything to you?|- A little.

It's throwing the gyroscopic controls|of a guided missile off balance with a...

a radio beam or something.

Five million dollars' worth of missile|aimed at a spot in the South Atlantic,

but finishing up in the Brazilian jungle,|is bad enough.

Now they're gonna try orbiting a rocket|round the moon.

The American CIA sent a man down|to work with Strangways.

- A fellow called Leiter. Do you know him?|- I've heard of him. Never met him.

Has he found out anything important?

Better ask "him". You're booked|on the 7 o'clock plane to Kingston.

That gives you exactly|three hours, 22 minutes.

You'll get a set of background papers|at the airport, in a self-destructor bag.

You can study them during the flight.

I want to know|what's happened to Strangways.

Take off your jacket.

Give me your gun.

Yes, I thought so. This damn Beretta|again. I've told you about this before.

You tell him - for the last time.

Nice and light - in a lady's handbag.

I've used a Beretta for ten years.|I've never missed with it yet.

Maybe not, but it jammed on your last job|and you spent six months in hospital.

A double-O number means you're|licensed to kill, not get killed.

Richard Maibaum (May 26, 1909 – January 4, 1991) was an American film producer, playwright and screenwriter best known for his screenplay adaptations of Ian Fleming's James Bond novels.His widow, Sylvia Maibaum, pointed out that her husband was more than just a marvelously entertaining writer. He was, she said "innovative. Among his works are 'firsts': The first anti-lynching play on Broadway, The Tree (1932); the first anti-Nazi play on Broadway, Birthright (1933); the first movie that dealt with the problem of medication abuse, Bigger Than Life, written in 1955, released in 1956; the first movie that dealt with the ethical and moral decisions in kidnapping cases, Ransom!; the first movie that introduced the American public to the importance of training airmen for the defense of the United States in a war many recognized as coming, I Wanted Wings (Spring, 1941); and Diamonds Are Forever, begun 1970, the first film that discussed the use of laser-like satellite mounted weapons for global warfare."His papers now reside at his alma mater, the University of Iowa. more…

Discuss this Dr. No script with the community: