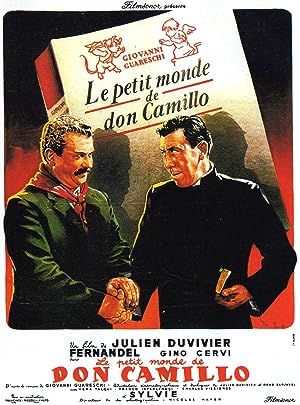 Synopsis: In a village of the Po valley where the earth is hard and life miserly, the priest and the communist mayor are always fighting to be the head of the community. If in secret, they admired and liked each other, politics still divided them as it is dividing the country. And when the mayor wants his "People's House"; the priest wants his "Garden City" for the poor. Division exist between the richest and the poorest, the pious and the atheists and even between lovers. But if the people are as hard as the country, they are good in the bottom of their heart.
Genre: Comedy
Director(s): Julien Duvivier
Actors: Fernandel, Gino Cervi, Vera Talchi, Franco Interlenghi
Production: I.F.E. Releasing Corporation
Nominated for 1 BAFTA Film Award. Another 4 wins & 1 nomination.

Only in here | can you do what you want.

You must stay within the law | and we will...

...at the cost of nailing all enemies | of the people to a wall!

You try, you'd have | to aim a cannon at the bell tower.

If he won't stop, we should | shoot him in the tower window.

You'd better kill him | on the first shot, he'll shoot back.

Why is he stopping? | Why is he letting them speak?

Is he one of them? I've always said | he was a Bolshevik priest.

Isn't that Mariolino | carrying the flag?

...standing on the platform. | A nice family of criminals!

We will no longer tolerate any | attempts on our freedom of speech!

Those who hide | in the shadow of the Cross...

...are the same ones who betrayed | Christ many centuries ago.

They're attacking the Church! | They must be stopped! I can't stay.

Go on, ugly! | Go join your band of brigands!

Better my brigands | than your damned priests.

Comrades, | we have another comrade!

[Lf Don Camillo is ringing the bells, | it's not to celebrate his victory.]

[Lt is because he's happy | for his old enemy, Peppone.]

[Their struggle | has gone on for years.]

[They left for the war together | and returned together...]

[One night an old abandoned house | began to burn...]