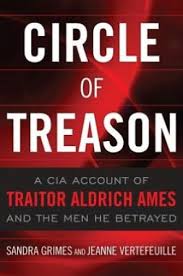 Stombaugh is surrounded, his bag seized. The Zhiguli fires

up and tears away down the street. The KGB men force his

arms over his head, immobilizing him.

My name is Paul Stombaugh, I am a

diplomatic attach. to the United

He is dragged to a waiting van, a KGB CAMERA CREW recording

the arrest on video.

Sandy pulls up to the security checkpoint off Dolley Madison

Blvd. She shows ID to the marine on duty. As she drives

through, a shift of perspective reveals the sprawling CIA

A TELEX prints out a restricted-handling cable... ‘IMMEDIATE

HOURS EVENING OF 13 JUNE WHILE ON OPERATIONAL RUN TO MEET

Sandy comes through the open pen that serves the Soviet and

East European Division. It’s like a newsroom: busy with

typewriters and telexes rattling. She arrives at her

cubicle, where a crowd surrounds a counterintelligence

officer who’s entertaining them with a joke - Aldrich Ames.

...and the Commissar says, of

course Adam and Eve are Communists!

They’re bare-ass naked with an

they still think they’re living in

Laughter from the men, the room is mostly men. Rick catches

her eye and grins. Sandy smiles back, checking her morning

cable traffic - she likes this man. Across the room, PAUL

REDMOND, 44, bow-tie and shirtsleeves, steps from one of the

Discuss this Circle of Treason script with the community: