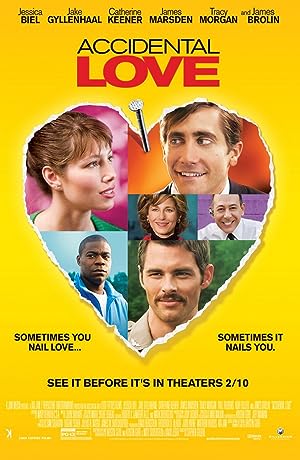 Synopsis: An original political satire about a naive small town waitress who accidentally gets a nail buried in her head, causing erratic and outrageous behavior that leads her to Washington DC. There she falls for a dashing, but clueless, Congressman who searches for the courage to save her.
Genre: Comedy, Romance
Director(s): David O. Russell
Actors: Jessica Biel, Raymond L. Brown Jr., Jenny Gulley, Beverly D'Angelo
Production: Millennium Entertainment

against The Fancy Gondola?

With the courts and all, it

would take years to collect.

Wait. How much could this cost, anyway?

It's stuck in the sesamoid bone that's

behind the nose. It's deep. It's not good.

Maybe we could get married and

then I can be on Scott's plan.

OK, then the nail would be a preexisting

condition and the insurer won't pay.

Well, what if we just leave it in there?

I've seen this on the Internet.

You know, some rocker dude has nails

in his head and he's fine. I could be fine.

It depends on where it is. And

yours is in a super unlucky place.

OK, how unlucky are we talking, Doc? I

deal with odds on a daily basis, OK?

That's my job. What are the odds of

Alice being completely messed up?

She could lose mouth motor

Have a lifetime of heavy drooling.

Not a fun wife.

Well, our love is stronger

than that, right, Scotty?

Let's just s-see what the doctors have to say.

Another option, if the nail

shifts within the lobe, uh...

then she's likely to lose

all kinds of inhibitions.

- Yeah, that could be good.

Wow! Now, maybe I can finally have an orgasm.

don't have orgasms from intercourse.

And then taking it at the

The nail in this lobe, um, could actually

cause her fits of panic, um, unpredictable moments

And she could start speaking, uh...

Kristin Carlson Gore (born June 5, 1977) is an American author and screenwriter. She is the second daughter of Al and Tipper Gore and the sister of Karenna Gore Schiff, Sarah and Albert III. more…